Spinapse has announced PixPop, a new game that has players popping pictures and boosting brain cells. PixPop's tap-and-pop interface is a natural fit for the iPhone and will appeal to players who like matching games, jigsaw puzzles, hidden objects, and other visually engaging games. The PixPop series launches with four games designed for different interests - Dogs, Art, Extreme Sports, and Around the World. Additional games in the series are under development, and a free version will be released soon.

PixPop features a unique style of game play, influenced by the popularity of hidden object games and jigsaw puzzles. Players hunt for matching tokens from larger images, which range from paintings by famous artists to striking photos from hotspots around the world. With each pop, players earn points and a shot at the Worldwide Scoreboard. Strategic use of hints and bonus squares can boost performance, and PixPop provides many options for players to customize the game to fit their preferred speed and level of difficulty.

Pricing and Availability:
The PixPop series for iPhone are only $0.99 (USD) each and available exclusively through Apple's App Store. 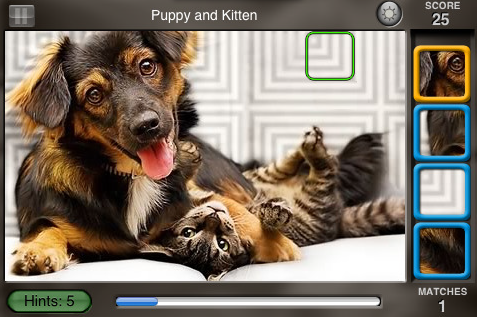