Ralph Nader, a five-time presidential candidate, has written an open letter to Apple CEO Tim Cook criticizing him for spending billions on stock buybacks instead of helping impoverished factory workers.

Nader notes that if Apple had spent that $130 billion to endow a foundation, the interest would have been enough to double wages, ensure a 40 hr work week, and improve health, safety, and environmental standards for hundreds of thousands of workers.

You can read the full letter to Tim Cook below...

“Designed by Apple in California” has a nicer ring to it than “Assembled by workers paid about a dollar per hour, working 11­hour shifts, and sleeping eight to a room in the Jabil Circuit corporate dormitories in Wuxi, China.” But, no matter how you spin it on the iPhone packaging, you continue to turn away from the horrid working conditions and miserly pay at your Chinese factories. Just last month, while you displayed ­­through a two hour event on the ins­and­outs of tiny iPhone 6 and Apple Watch design breakthroughs how capable your company is of solving problems it cares to solve, China Labor Watch and Green America revealed ­­in their newest report, “Two Years of Broken Promises”­­ how you have failed to apply even a modicum of the problem­solving focus you bring for product design to the “serious health and safety, environmental, and human rights violations” at Chinese factories assembling the iPhone.

“That’s the price of affordable phones,” says the corporatist argument. This could be the case, if Apple was just barely profitable. But, as revealed in a recent letter responding to Carl Icahn’s call for more stock buybacks (you respond to billionaire’s pleas much more often than workers’ pleas), Apple is planning to have repurchased $130 billion of its own shares by the end of next year. In short, Apple is so profitable, that it does not know what to do with $130 billion except buy back stock from its shareholders to maybe boost its share price.

There are many alternate ways could have spent its surplus profits. For example, what if Apple decided to invest that excess $130 billion in dignified working conditions and living wages, instead of unproductively using their surplus to buy stocks back from the wealthy? Estimates differ, but according to Chinese labor watchdogs, factory workers in Apple’s supply chain make average salaries of, estimating at the high end, about $500 per month for about 80 hours of work per week. Doubling monthly salaries and cutting hours in half ­­ reforms that would make great strides towards having Chinese factories meet modern, dignified standards of a living wage from a 40­hour work week ­­ would cost ~$1500 per month (~$18,000 per year) for each factory worker. To have achieved
these reforms for the 300,000 Foxconn workers who assembled the iPhone 5s would have cost
Apple about $5.4 billion annually.

If instead of buying back stock, Apple had used its excess $130 billion to endow a foundation to achieve these reforms, it would have paid out ­­at a conservative five percent interest ­­ $6.5
billion annually, enough to double wages and ensure a 40­hour workweek for hundreds of thousands of iPhone workers, while leaving a $1.1 billion surplus as an annual budget for ensuring top­notch health, safety and environmental standards at Apple factories. The technology company that leads the way in profits and product design could, without changing anything but the amount of excess, unproductive money it uses to repurchase stock from wealthy shareholders, could also lead the way in dignified working conditions, hours and wages. Finally, some of Apple’s Chinese factory workers may become able to buy the iPhones they manufacture.

This goes to show that tolerating poverty wages is not the price we pay for affordable phones. Rather, poverty wages and harmful conditions are a consequence of tolerating outrageous stock buybacks. You had a choice for the $130 billion: living wages for workers or stock buybacks for millionaires? You chose buybacks. Here’s a challenge for the present and future use of surplus profits: why not let the customers decide? Just as they have consumer interests in thinner iPhones and sleeker MacBooks, they also have humane interests in more dignified working conditions and more liveable wages for the workers that make their products. And you, more than any other CEO, have the technological ability to poll your customers about who Chinese workers or millionaire shareholders should receive Apple’s excess money. Are you scared that they might Think Different about this issue than Carl Icahn?

Let us know what you think in the comments. How should Apple have used its excess funds. 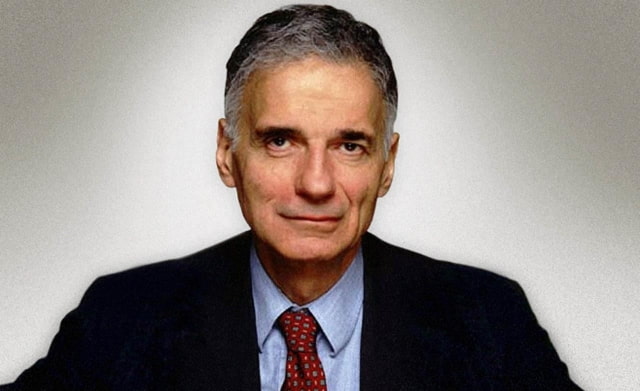 Lolwut - January 13, 2015 at 12:37am
Who said anything about being greedy? He's not one of the wealthiest thereby not stealing money.
Reply · Like · Mark as Spam

James White - October 26, 2014 at 7:16pm
I wasn't aware that Apple owned any companies in china. Sure Apple could take there business elsewhere but would that really solve any of the issues that Mr. Nader spoke of?
Reply · Like · Mark as Spam

Fake-You Mother Faker - October 26, 2014 at 3:38pm
Do you know any apple workers at the Apple store wanting to stay till retirement ? Like having a career there?
Reply · Like · Mark as Spam

King Rollo - October 26, 2014 at 8:23am
I'm not American but even I can see this guy is a dumb fu@k. Isn't he the plank who destroyed the corvair car by writing a book? If you look at his resume he is nothng short of a anti capalist..
Reply · Like · Mark as Spam
43 More Comments
Recent