Two developers in southern France wanted to create an 'I Am Charlie' app to let people show their support for free speech and freedom of expression following the January 7th, 2015 massacre in Paris, France. Twelve people were killed at the offices of the satirical newspaper Charlie Hebdo leading many to take up the 'Je suis CHARLIE' expression as a rallying cry.

However, as many developers know, it can take a long time (around 10 days) to get a new app approved for the App Store. So they wrote to Apple CEO Tim Cook.

While it usually takes more than 10 days to validate an application on the App Store, they wrote directly to Tim Cook Friday night to inform him of the idea. In the ten minutes, they had an answer from one of his assistants who gave them the go to validate within an hour of the application, to one condition; be associated to a press publication of a certain value. That will be "Nice Matin", obligation of proximity.

The app lets you mark your location on an map in support of the campaign. Here is the description in French.


You can download Je suis CHARLIE ! from the App Store for free.

Read More [via iPhon.fr] [via Yohann] 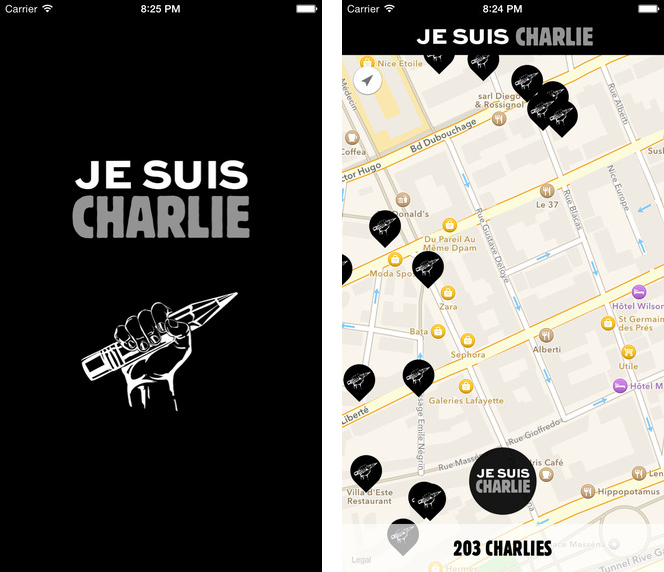 malaka malakia - January 14, 2015 at 4:46pm
islam is a stupid religion like all the other ones meat to control you stop being stupid and thing for yourself
Reply · Like · Mark as Spam

abdellllllllllll - January 18, 2015 at 6:44pm
Islam is a relegion of peace and freedom of speech, know it before judging it ! the only victim in what's happened and will happen is Islam, it's a very crual plan against it, because it has the power to give people to live in peace, and that's what dark forces don't want to happen ! please go search the truth before judging. peace !
Reply · Like · Mark as Spam

youcef - January 14, 2015 at 11:50am
i believe that the right of expression that's not mean right four insulting people or there religion. Je Suis Prophet MOHAMED
Reply · Like · Mark as Spam

Everybody wonders - January 14, 2015 at 12:08pm
If the prophet was offended, let him sort it out with the 'culprit'. Same goes for god, allah, moses, mary or whomever you pray to
Reply · Like · Mark as Spam
27 More Comments
Recent