Apple has released a public beta of OS X 10.10.3 featuring the new Photos app. First impressions of the new app indicate that it is a vast improvement over iPhoto.

The build is number 14D87p. That's the same build that was seeded to developers on February 23rd.

To get the beta you will need to join Apple's OS X Beta Program. Participating in the program will get you access to pre-release software and the ability to submit your feedback. 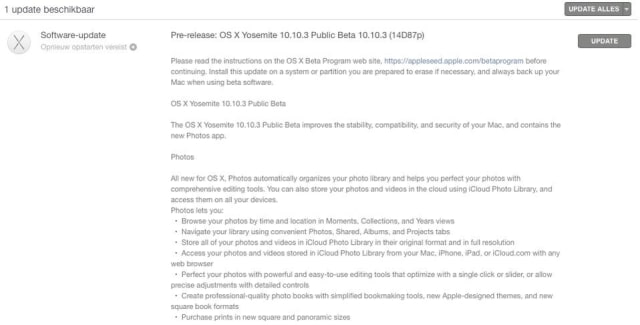 Justabrake - March 3, 2015 at 5:23pm
Trying it out myself had a couple internet problems at first but it's cleared up !
Reply · Like · Mark as Spam

So far so good. - March 3, 2015 at 1:38am
Works well with both iMac and iOS devices (iPhone & iPad), all on the Beta program. So far so good. The only thing is that I have multiple iPhoto libraries, so I hope iPhoto will continue to be supported until Photos can also have multiple libraries on the Mac.
Reply · Like · Mark as Spam

Gu - March 3, 2015 at 3:46pm
I agree, looks like it is working well. Although, some of my pictures aren't being loaded on in their albums on the iPad/iPhone like they are on my Macbook Pro Aperture library (which I imported to Photos). I do have a second Aperture library on my iMac which is much larger so I may upgrade that to beta as well to test it. On your iOS devices, are you using the "optimized iPad storage" or keep originals? Is there a way to download specific photos in their full resolution?
Reply · Like · Mark as Spam
Recent