Here's a look at iPad unit sales since their debut in 2010 from Benedict Evans.

The chart below shows trailing twelve month unit sales in millions. Apple today announced that it sold 9.883 million iPads in its fourth fiscal quarter of 2015. That's a 20% year over year decline.

Is the larger iPhone cannibalizing iPad sales? Take a look at the chart below and let us know your thoughts in the comments. 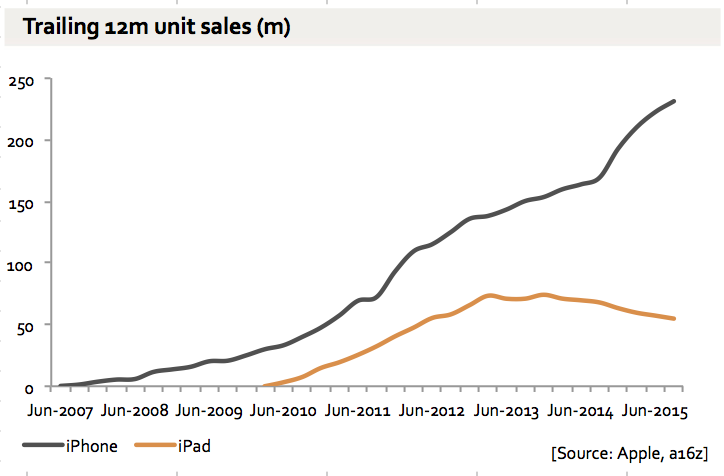 Jay - November 4, 2015 at 12:43pm
There's nothing new about the iPad since they launched Retina display on the iPad 4 they have been importing the components from the iPhone but there's no big change since then
Reply · Like · Mark as Spam

You wish - November 4, 2015 at 2:01pm
There has been countless changes to the iPad since Retina display compared to iPad 3 and 4 change. Laminated display, multitasking, Apple Pay for iPad, gb of ram in iPad Air 2, least reflective display, cameras, and the boost in signals. If this wasn't enough, wait until pro comes blowing you away.
Reply · Like · Mark as Spam

Jay - November 4, 2015 at 10:25pm
Still they haven't updated the camera to 4K video and the screen is still 1080p so it's not a big improvement over the years they didn't even introduce 3D Touch on iPad pro or iPad mini.
Reply · Like · Mark as Spam
15 More Comments
Recent