● Fixed: An issue customers encountered while updating to 13E5181d that caused
devices to freeze on the Apple logo.
● Fixed: Starting an app that uses compass data on a device that doesn’t include a motion coprocessor (that is, iPhone 5c and 5, iPad 2, iPad mini and earlier), causes locationd to crash for as long as the compass request continues. Also, Camera photos are not geotagged.

Click here to see what's new in iOS 9.3 Preview or hit the link below to download the new build... 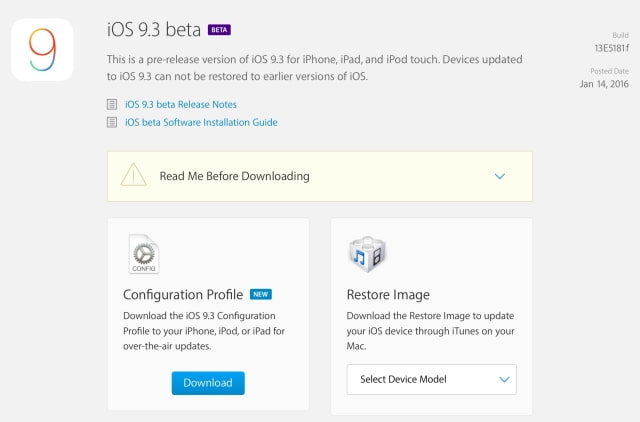 Jack - January 14, 2016 at 8:51pm
I guess he meant why just an update is soo buggy if the previous version is stable and fine. Because they don't create a completely new software, do they?
Reply · Like · Mark as Spam

38567Dave - January 17, 2016 at 5:59pm
Because they change code to add new features, and other things depend on that code to run, changing it breaks other things that they now need to update to accept said new code Domino effect
Reply · Like · Mark as Spam
Recent