It's been two years since Apple topped the global smartphone vendor ranking but its lead is small with only 256,000 units difference.

"The last time Apple was in the leading position was in the fourth quarter of 2014, when its sales were driven by its first ever large-screen iPhone 6 and 6 Plus," said Anshul Gupta, research director at Gartner. "This time it achieved it thanks to strong sales of its flagship phones — the iPhone 7 and iPhone 7 Plus; it also benefited from the weakened demand for Samsung's smartphones in mature markets such as North America and Western Europe, and in some mature markets in Asia such as Australia and South Korea." 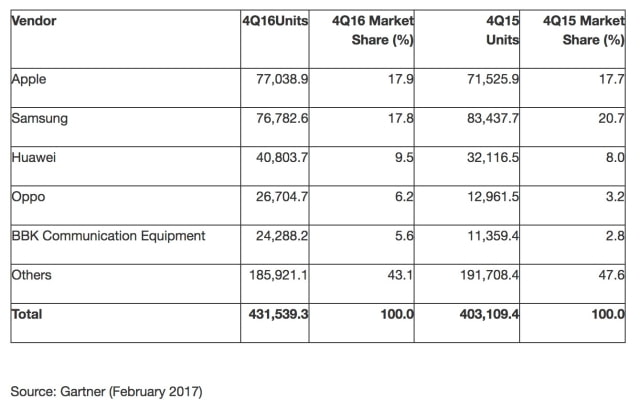 Another notable tidbit from Gartner's report is the decline of BlackBerry's market share. The company captured 0.0% of the smartphone market in 4Q16 as it turns its focus towards software. At the time of the iPhone's launch 10 years ago, BlackBerry was a dominate force in smartphone arena. 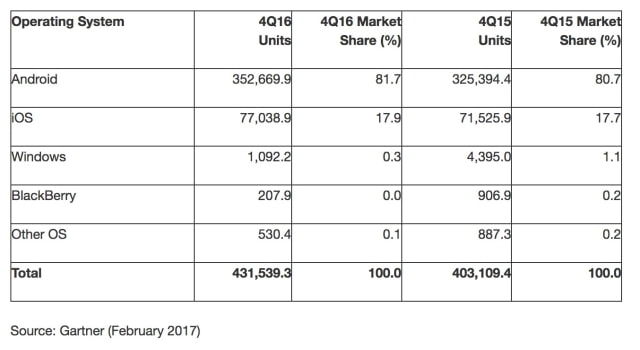 lepaka - February 16, 2017 at 8:29am
I would not say it so easily. First impression, we can say it yes Samsung did sh*t and those users flipped to iPhone, but usually the normal long time users are not anymore switchers, one good reason is the Operating System, once they are connected with one platfform they will stick on it. lets just admit that both iOS and Android are good OS systems, we buy our Apps and if we migrate to the other OS, mostly we loose the Apps and we have to buy them again :( if you look careful to the sold quantities, you see big increase from the Chinese branches (Huawei and Oppo), there are the flippers, they can use the same OS as before and get the same level of Phones for much lower price. Those Phones are selling like chipps all over the world for such cheap prices (supermarket promotions), even the Chinese are not buying them. Apple iPhones grow is just a normal one, from the own Apple markting strategy ...
Reply · Like · Mark as Spam
Recent