Steve Jobs has responded to a developers plea to keep his app name after Apple legal demanded he change it, reports CrunchGear.

The Little App Factory received a letter from Baker & McKenzie, representing Apple, demanding that they change the name of iPodRip.

Originally written in 2003, iPodRip lets your copy and transfer your songs from iPod and iPhone to your computer. Its been downloaded five million times and processed more then one billion songs.

My name is John Devor and I’m the co-owner of a small Mac shareware company named The Little App Factory and a long-term Apple customer and shareholder. I doubt you’re aware but we recently received a letter from a law firm working on Apple’s behalf instructing us that we had violated several of Apple’s trademarks in our application iPodRip and asking us to cease using the name and Apple trademarks in our icons.

We have been distributing iPodRip since 2003 with the aim of providing a method to recover music, movies and photos from iPods and iPhones in the event of a serious hardware failure on their Mac which leads to data loss. Our goal has been to provide the highest quality product coupled with the highest quality service in a bid to resolve some of the angst that is generated by such an ordeal; service befitting of an Apple product. In this department we think we have succeeded as we have approximately 6 million customers, many Apple employees, music artists and other notable people in society. In fact I’d argue that our customer service is the best of all competing applications in our niche as many of them are scams and frauds that leave Apple customers with a terrible taste in their collective mouths. We fear very much that tens of thousands of Apple customers looking to recover their own music and having heard of our product via word-of-mouth or otherwise, will instead find a product produced by one of our competitors, and will wind up the victim of a scam (one closely-named competitor charges a hidden monthly fee, for instance).

It is quite obvious that we mean Apple no harm with the use of the name iPodRip, or of the inclusion of trademarked items in our icons, and in fact I believe that we have been providing an excellent secondary service to Apple customers that has potentially caused you many repeat clients. In fact, we are quite aware that Apple support and store staff have recommended our software on numerous occasions as far back as 2004 so we have felt that we were doing something right!

With this in mind, we are in desperate need of some assistance and we beseech you to help us to protect our product and our shareware company, both of which we have put thousands upon thousands of hours of work into. Our company goal is to create Mac software of the highest quality with the best user experience possible. I myself dropped out of school recently to pursue a path in the Mac software industry, and you yourself have been a consistent inspiration for me.

If there is anything at all you can do with regards to this matter, we would be most grateful.

The Little App Factory has since changed iPodRip to iRip and has also been forced to remove the iPod icon in Evom. 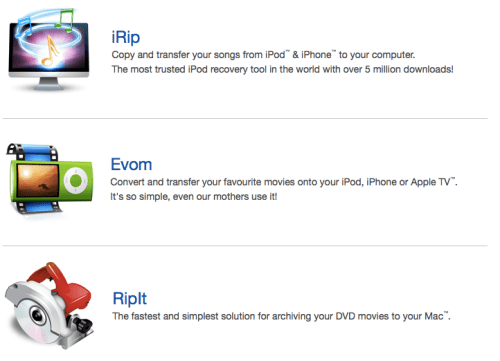 ZP - November 21, 2009 at 11:46pm
Although it is a long plea, I do not think the letter make valid arguments for keeping its name. I do not make a judgement on whether Steve Jobs did reply in this way, as the real problem is the letter is too weak. I think the author of the letter well aware it is unlikely to win the case in the legal process, He would rather play media card instead.
Reply · Like · Mark as Spam

Joe Cole - November 21, 2009 at 7:15am
He should have written to Phil Schiller, at least he would have gotten a decent reply. Jobs is an a$$hole of the highest order.
Reply · Like · Mark as Spam

Jay - November 19, 2009 at 3:49pm
So fake... Steve Jobs would have had someone else respond and it would of been longer. Really think Steve Jobs kept the default signature \"Sent from my iPhone\" on his iPhone? Dont think so.
Reply · Like · Mark as Spam

Angelus - November 19, 2009 at 2:52pm
Given the length to which this guy went to in writing his letter Steve Job\'s reply and lack time given to write his reply shows his character. Not a very nice person, and I\'m sure a lot of people will be very happy when a better product then the iPhone comes out.
Reply · Like · Mark as Spam
5 More Comments
Recent