New AirPods which support Bluetooth 5.0 have surfaced in the Bluetooth SIG database. Only devices which have completed the Bluetooth Qualification Process appear in public search results.

The listing which was published on November 1, 2018 reveals two new models numbers: A2031 and A2032. These likely refer to the left and right earbuds.

Apple was rumored to be unveiling new AirPods with Hey Siri support at the iPhone or iPad special events this fall but there was no mention of new AirPods or the AirPower wireless charging pad at either event.

It's still possible that Apple could launch the new AirPods with a press release ahead of the holiday shopping season. You can follow iClarified on Twitter, Facebook, Google+, or RSS for updates. 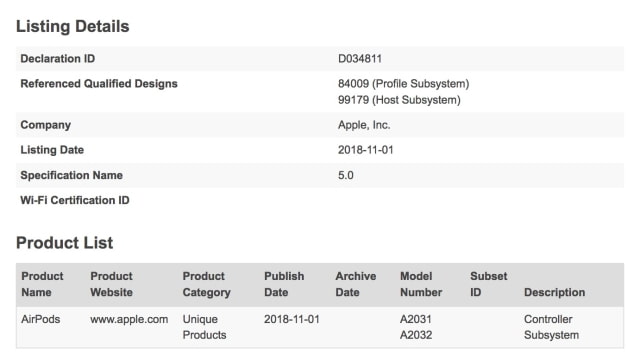