The new Skype for Web has dropped support for the Safari, Firefox, and Opera web browsers.

Users quickly discovered that the update drops support for several web browsers. Microsoft confirmed the news in a statement to VentureBeat.

A Microsoft spokesperson said the service requires “calling and real-time media” technology that is “implemented differently across various browsers.” So the company “decided to prioritize bringing Skype to [the] web on Microsoft Edge and Google Chrome based on customer value.”

For now, you'll have to switch to Chrome or Edge to access Skype for Web. You could also try to change your user agent to mimic Chrome as there have been some reports of that working. 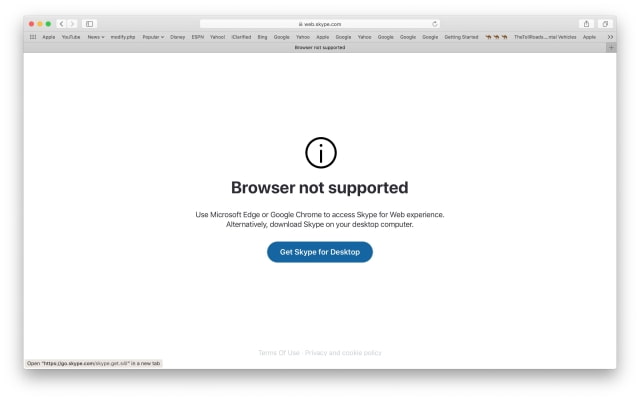 dgadirector - March 9, 2019 at 9:56pm
“Based on customer value?” There is zero value in having it be only useable on Chrome. I somehow missed Microsoft’s purchase of it. Another program down the drain.
Reply · Like · Mark as Spam

1reader - March 9, 2019 at 8:36pm
Skype changed so much, from number 1 to communicate abroad to ... who knows maybe 5th. Changes start to happen especially since Microsoft acquired them.
Reply · Like · Mark as Spam
Recent