Apple has issued a statement following an article in the New York Times highlighting the removal of numerous parental control apps from the App Store. The article suggests that Apple may be cracking down on the apps because they rival the company's Screen Time feature.

Here's the full statement released by Apple to the press:

-----
Apple has always believed that parents should have tools to manage their children’s device usage. It’s the reason we created, and continue to develop, Screen Time. Other apps in the App Store, including Balance Screen Time by Moment Health and Verizon Smart Family, give parents the power to balance the benefits of technology with other activities that help young minds learn and grow.

We recently removed several parental control apps from the App Store, and we did it for a simple reason: they put users’ privacy and security at risk. It’s important to understand why and how this happened.

Over the last year, we became aware that several of these parental control apps were using a highly invasive technology called Mobile Device Management, or MDM. MDM gives a third party control and access over a device and its most sensitive information including user location, app use, email accounts, camera permissions, and browsing history. We started exploring this use of MDM by non-enterprise developers back in early 2017 and updated our guidelines based on that work in mid-2017.

MDM does have legitimate uses. Businesses will sometimes install MDM on enterprise devices to keep better control over proprietary data and hardware. But it is incredibly risky—and a clear violation of App Store policies—for a private, consumer-focused app business to install MDM control over a customer’s device. Beyond the control that the app itself can exert over the user's device, research has shown that MDM profiles could be used by hackers to gain access for malicious purposes.

Parents shouldn’t have to trade their fears of their children’s device usage for risks to privacy and security, and the App Store should not be a platform to force this choice. No one, except you, should have unrestricted access to manage your child’s device.

When we found out about these guideline violations, we communicated these violations to the app developers, giving them 30 days to submit an updated app to avoid availability interruption in the App Store. Several developers released updates to bring their apps in line with these policies. Those that didn’t were removed from the App Store.

We created the App Store to provide a secure, vibrant marketplace where developers and entrepreneurs can bring their ideas to users worldwide, and users can have faith that the apps they discover meet Apple’s standards of security and responsibility.

Apple has always supported third-party apps on the App Store that help parents manage their kids’ devices. Contrary to what The New York Times reported over the weekend, this isn’t a matter of competition. It’s a matter of security.

In this app category, and in every category, we are committed to providing a competitive, innovative app ecosystem. There are many tremendously successful apps that offer functions and services similar to Apple’s in categories like messaging, maps, email, music, web browsers, photos, note-taking apps, contact managers and payment systems, just to name a few. We are committed to offering a place for these apps to thrive as they improve the user experience for everyone.
-----

Although Apple states that it's preventing apps from using MDM for security reasons, this also prevents applications from offering the same features Screen Time is able to offer. With limited functionality, alternative apps can't compete with Apple's. One solution might be an API for Screen Time; however, this doesn't exist yet.

Kidslox and Qustodio, two parental control apps, have already filed a complaint with the EU alleging antitrust violations so it's likely this will be investigated further. Please follow iClarified on Twitter, Facebook, Google+, or RSS for updates. 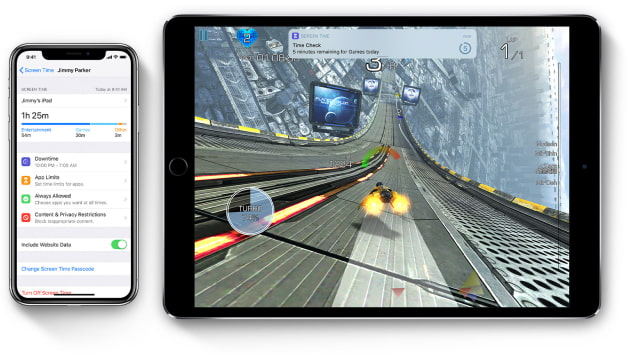