The third beta of iOS 13 recently released to developers contains some new assets in the Setup app that suggest a new method of transferring data from one iPhone to another using a direct cable.

9to5Mac found an image which clearly shows an older iPhone with a home button attached directly to a newer iPhone by a cable.

New assets and strings found in iOS 13 beta 3 suggest Apple is working on a way to transfer data from another iOS device directly, using a cable. One of assets shows an image of two iPhones connected to each other using a cable. It’s unclear how this could be achieved exactly given that current iPhones feature a Lightning port and Apple does not offer a Lightning-to-Lightning cable.

A 'PROGRESS_DETAILED_WIRED' string reads "Keep your other iPhone connected to this iPhone and connected to power until the transfer is complete."

One possibility is that Apple is planning to move the iPhone to USB-C, letting users move data from their old device to their new device using an included USB-C to Lightning cable. Another is that a the wired transfer will require a dongle on one device. While unlikely, it's also possible that Apple could offer a new Lightning to Lightning cable. 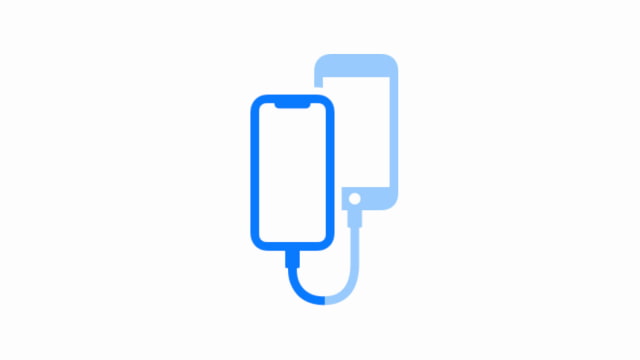 gmcmoz - July 3, 2019 at 4:01pm
I work at T-Mobile we use the connector that comes in the box to transfer to galaxy phones. From any phone it works... even if you have an iPhone. So i believe apple is going to USB c, because my iPad Pro is already usb c. Then we can finally use the cable to transfer into iPhones with a smart connector like what galaxies have. (USB to USBC). It will literally charge anything with a usb as long as you have a smart connector ...
Reply · Like · Mark as Spam

1reader - July 3, 2019 at 3:54pm
Or transfer DC between iPhone that don’t have wireless charging capability
Reply · Like · Mark as Spam
Recent