Apple is testing new features for iMessage that could arrive as early as iOS 14, reports MacRumors.

One of the key improvements is the ability to mention other contacts with @:

For starters, there is a new Slack-like mention system that would allow users to tag other contacts with their name like @Joe or @Jane. When you type the @ sign, a list of suggested contacts would appear. This would be particularly useful in busy group chat conversations, as it would be possible to enable the "Hide Alerts" setting and only receive push notifications when you are mentioned directly.

Apple is also testing the ability to retract messages after they've been sent. A removed message would be replaced with fine print indicating it has been retracted. It's unclear if Apple will put a time limit on the feature.

Other improvements being worked on include typing indicators in group chat, the ability to mark the last message in a conversation as unread, and the expansion of the /me command for sharing status updates.

The site suggests that Apple could make these features available to Mac users via a new Catalyst version of the Messages app, something that's been rumored for quite some time. 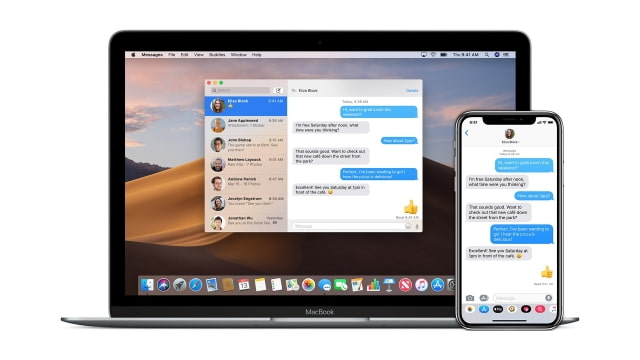