App Store revenue grew 28% in 2020, up from 3.1% growth in 2019, according to CNBC’s analysis. Apple’s App Store is a core growth area for the company. It’s reported as part of Apple’s Services division, which reported $53.7 billion in sales in Apple’s fiscal 2020, which ended in September.

The $64 billion number is based on Apple's announcement this week that it had paid developers $200 billion since 2008. That's up $45 billion from the figure announced last year. CNBC notes that Apple takes a 30% cut from most App Store transactions so that $45 billion would represent 70% of gross revenue.

Apple recently announced that it would reduce its 30% take to 15% for developers who made less than $1 million USD in 2020. However, it's unlikely this will have a major affect on the company as the top 1% of apps are estimated to generate 93% of App Store revenue. More details on the new program here. 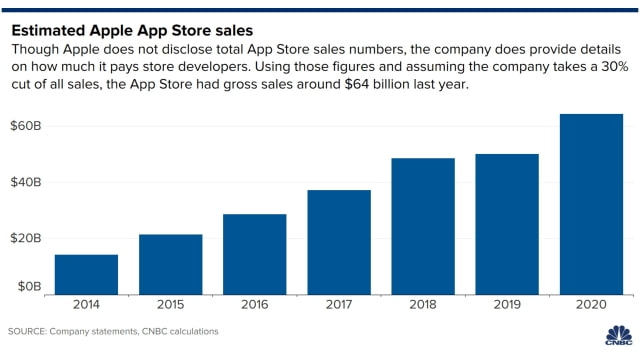