Petapixel used Pugetbench to compare the speed of an M1 Mac Mini, a 13-inch MacBook Pro, and a Dell XPS 17.

The M1 Mac mini received the second highest score the site has ever seen, losing points due to raw GPU performance. Notably, the M1 Mac mini excelled in the photo merge test.

None of the computers we’ve reviewed, not even the most expensive 16-inch MacBook Pro you can buy or the Razer Blade Studio Edition, has ever broken the 100 mark on the PugetBench Photo Merge test. Running optimized Photoshop, the M1 Mac mini hit 130+ in run after run after run.

Petapixel notes that the M1 Mac mini was able to merge a 6-photo panorama shot on the Nikon D850 in 1 minute and 14 seconds. Compare that to 1 minute and 52 seconds on a $6,700 fully-loaded 16-inch MacBook Pro with an 8-core i9 processor and discrete GPU.

Hit the link below for more details and click here for more information about the new version of Photoshop. 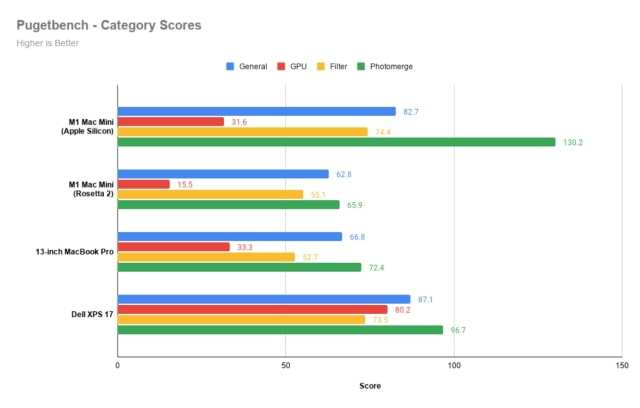