Apple's iPhone shipments to countries in the Gulf Cooperation Council (GCC) increased 55% quarter-on-quarter in Q4, according to a report from IDC. That compares to overall QoQ market growth of 8.2% in Q4 to 5.38 million units.

Apple posted a remarkable 55.7% QoQ increase in shipments in Q4 2020 following the release of its iPhone 12 line of devices. "Apple enjoyed strong demand for the iPhone 12 series in Q4 2020, while its iPhone 11 series continued to perform well in the region," says Akash Balachandran, a senior research analyst at IDC. "Shortages in the supply of both the iPhone 12 and certain other models curtailed the maximum growth we could have seen from Apple in Q4 2020."

IDC expects the GCC smartphone market to experience a minor 0.7% QoQ decline in shipments in Q1 2021. "Supply constraints will likely continue to hamper growth in the region due to chipset and component shortages across most smartphone brands in the first half year," says Ramazan Yavuz, a senior research manager at IDC. "However, with supply returning to normal and with the vaccine rollout expected to significantly reduce the possibility of additional lockdowns and spikes in COVID-19 cases, the market is set to see growth return toward the second half of the year.

"On 5G front, 5G devices accounted for 16.5% of all smartphone shipments across the GCC in Q4 2020. Significant growth is expected in the shipments of 5G-enabled devices in 2021, particularly as they increasingly become available in mid-tier price bands among Android devices." 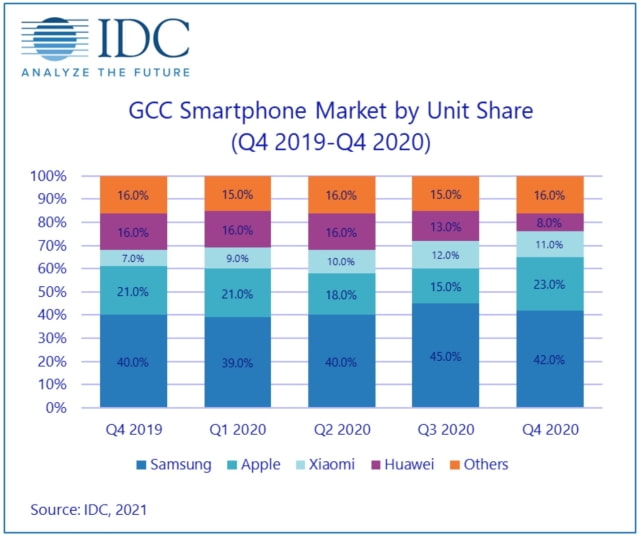