The FTC has submitted its report to Congress identifying numerous restrictions imposed by manufacturers to make repairs by consumers more difficult than they should be. These include adhesives that make parts difficult to replace, limiting the availability of spare parts, and making diagnostic software unavailable.

The report found that “there is scant evidence to support manufacturers’ justifications for repair restrictions”. It also explores means of expanding consumers’ repair options and how the Commission could assist in that expansion, consistent with its statutory authority. In addition, the Commission notes that it stands ready to work with lawmakers, either at the state or federal level, to ensure that consumers have choices when they need to repair products that they purchase and own.

Congress directed the FTC to issue the report, noting that it “is aware of the FTC’s ongoing review of how manufacturers—in particular mobile phone and car manufacturers—may limit repairs by consumers and repair shops, and how those limitations may increase costs, limit choice, and impact consumers’ rights under the Magnuson-Moss Warranty Act.” Congress specifically directed the FTC to include recommendations on how to best address these problems.

Apple is mentioned numerous times in the report. It's noted that Apple has taken steps to block to the availability of service manuals and has synchronized parts to the logic board making the part repairable only by Apple.

McDonough explained that Apple synchronizes some iPhone parts to the device’s logic board, making the part repairable only by Apple. Although McDonough said she does not believe this practice is widespread in the marketplace, she fears that other manufacturers will engage in a similar practice in the future, making it impossible for individuals and independent repair shops to make certain repairs to electronic devices.

The FTC also notes that Apple's battery replacement program indicates that users would choose a low cost repair option over replacing their phones.

Apple’s experience with its battery replacement program also suggests that, given a choice between a low-cost repair and buying a new mobile phone, many consumers will opt for the low cost repair. In early 2018, after Apple was found to be slowing down certain models of iPhones in order to compensate for degrading batteries, the company reduced the price of out-of- warranty battery replacements for iPhone 6 and later models. Under the program, Apple reduced the price for a battery replacement from $79 to $29. Subsequently, in a January 2, 2019 letter to investors, Apple’s CEO explained that iPhone sales were lower than anticipated due to, among other things, “some customers taking advantage of significantly reduced pricing for iPhone battery replacements.”

You can read the full report at the link below. 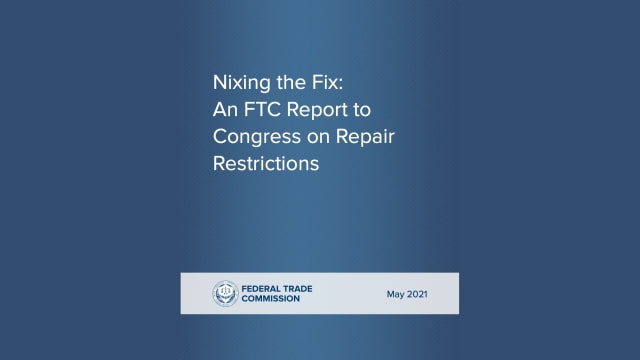