A Comscore study commissioned by Facebook found that preinstalled apps from Apple and Google dominate usage.

The study, shared exclusively with The Verge, suggests that it would be difficult for other companies to compete with default apps.

Preinstalled services dominate when it comes to basics like weather, photos, and clocks, according to the report, suggesting these categories will be difficult for other apps to compete in. Defaults don’t win out exclusively, though: Apple Maps and Music don’t appear on the iOS list at all, and Gmail makes the iOS list several entries below Apple Mail.

Nine of the top ten apps on iOS are from Apple, with only YouTube making the list in position nine. Looking at the entire list, only five of the top twenty apps are non-Apple apps. It's a similar situation on Android but slightly better.

Facebook paid for the Comscore study to show the “impact of preinstalled apps on the competitive app ecosystem,” said spokesman Joe Osborne. Apple disagreed with its findings. “This Facebook-financed survey from December 2020 was narrowly tailored to give the false impression that there’s little competition on the App Store,” an Apple spokesperson told The Verge. “In truth, third-party apps compete with Apple’s apps across every category and enjoy large scale success.” 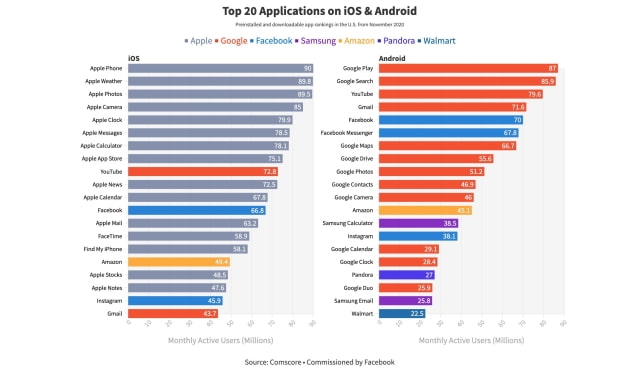