The Senators note that two companies, Google and Apple, have gatekeeper control of the two dominant mobile operating systems and their app stores that allow them to exclusively dictate the terms of the app market, inhibiting competition and restricting consumer choice.

“This legislation will tear down coercive anticompetitive walls in the app economy, giving consumers more choices and smaller startup tech companies a fighting chance,” said Blumenthal. “For years, Apple and Google have squashed competitors and kept consumers in the dark—pocketing hefty windfalls while acting as supposedly benevolent gatekeepers of this multi-billion dollar market. I’m proud to partner with Senators Blackburn and Klobuchar in this breakthrough blow against Big Tech bullying. This bipartisan bill will help break these tech giants’ ironclad grip, open the app economy to new competitors, and give mobile users more control over their own devices.”

“Big Tech giants are forcing their own app stores on users at the expense of innovative start-ups,” said Blackburn. “Apple and Google want to prevent developers and consumers from using third-party app stores that would threaten their bottom line. Their anticompetitive conduct is a direct affront to a free and fair marketplace. Senator Blumenthal, Klobuchar, I are committed to ensuring U.S. consumers and small businesses are not punished by Big Tech dominance.”

“Competition is critical to protecting small businesses and consumers, spurring innovation, and promoting economic equity. But as mobile technologies have become essential to our daily lives, it has become clear that a few gatekeepers control the app marketplace, wielding incredible power over which apps consumers can access. This raises serious competition concerns,” said Klobuchar. “By establishing new rules for app stores, this legislation levels the playing field and is an important step forward in ensuring an innovative and competitive app marketplace.” 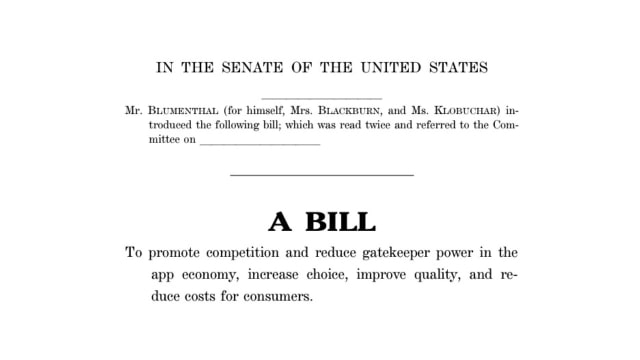 unklbyl - August 13, 2021 at 9:51am
I would like to use apps that I purchased in the App Store 4 years ago, but Apple or Google have “blocked” because the vendor has not done some theoretical agreement for 2021.
Reply · Like · Mark as Spam
Recent