The new iPhone 13 costs 81% ($437) more on average around the world than the first iPhone models, according to Self's iPhone Price Index.

The index shows the launch price of each flagship iPhone model across the globe and how much the phones cost locally as a percentage of GDP (PPP) per capita.

In the US, the cost of an iPhone has risen over 60% since its launch in 2007 outstripping a 42% increase in purchasing power. This means that in real terms, the iPhone now costs $88 more.

On average, the cost of a flagship iPhone has risen 7.75% per year in price versus purchasing power which has risen 3.75% per year. This means that an iPhone costs $154 more today than it did when originally launched across the globe.

The iPhone 13 is most expensive in India where people have to spend 14.75% of their yearly purchasing power to own one versus the US where the iPhone requires an expenditure of 1.17%.

You can check out the full price index at the link below... 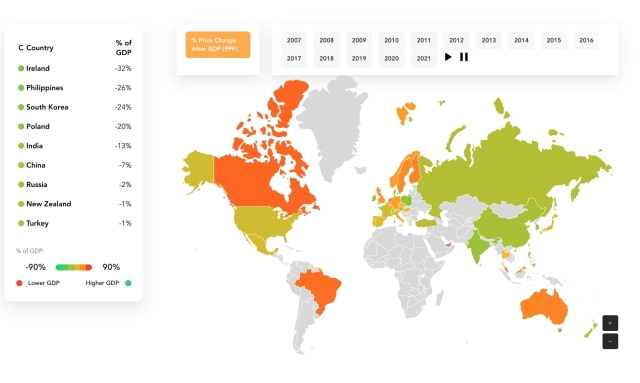