Qualcomm has announced plans to release a next generation Arm-based SoC that will compete with Apple's M-series chips in 2023, reports The Verge.

At the company's investor day event, Qualcomm Chief Technology Officer, Dr. James Thompson, announced the new chips are "designed to set the performance benchmark for Windows PCs". Hardware customers should get samples in about nine months, ahead of product launches in 2023.

In addition to offering competition to Apple’s stellar M-series chips (which power its latest MacBook Pro and MacBook Air laptops and iMac and Mac Mini desktops), Qualcomm is aiming to lead the field for “sustained performance and battery life,” too. Additionally, Qualcomm promised that it would be scaling up its Adreno GPUs, too, with the goal of offering desktop-class gaming capabilities for its future PC products.

The new chip is being designed by the Nuvia team which was acquired by Qualcomm for $1.4 billion earlier this year. Notably, Nuvia was created by a trio of former Apple employees who worked on the company's A-series chips. 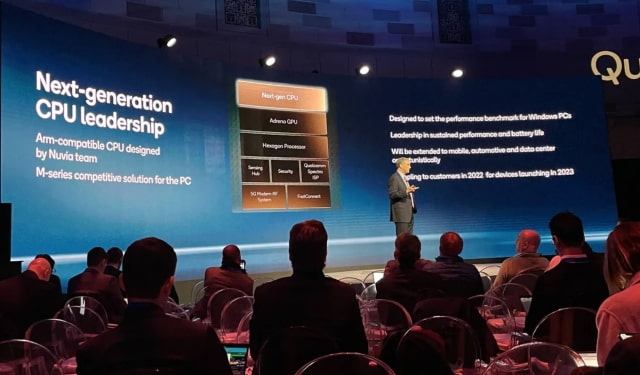