Joe Hewitt, a well respected developer at Facebook, has also taken issue with Android's definition of "open". Hewitt is most well known for creating the iPhone Facebook app; however, he quit due to tyrannical App Store approval policies.

Compare the Android "open source" model to Firefox or Linux if you want to see how disingenuous that "open" claim is.

Until Android is read/write open, it’s no different than iOS to me. Open source means sharing control with the community, not show and tell.

I think it is the lack of visibility into daily progress that bothers me about Android more than the lack of write access.

Refusing to share your vision and progress until the big event… how very open.

Point I am trying to make is, Rubin bickering with Jobs is a farce, because both refuse to share the one thing that matters: control.

@risaacs99 I am saying they are doing the bare minimum, but boasting as if they are on the level of Linux or Firefox, or even Chrome OS.

@risaacs99 like Rubin bragging about how downloading a months old code dump is the definition of open. 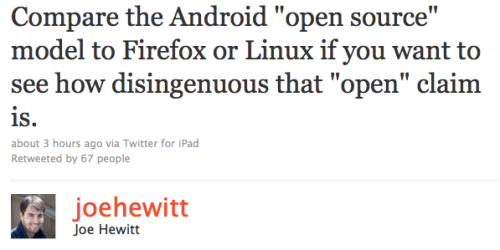