Apple has informed developers that it is deprecating access to the unique device identifier, or UDID, assigned to iOS devices, according to a TechCrunch report.

This is a big deal, especially for any mobile ad networks, game networks or any app which relies on the UDID to identify users. Many apps and mobile ad networks, for instance, uses the UDID or a hashed version to keep track of who their users are and what actions they have taken. App publishers are now supposed to create their own unique identifiers to keep track of users going forward, which means they may have to throw all of their historical user data out the window and start from scratch.


If Apple does permanently phase out UDID access it could cause major problems for developers and third party services. One mobile industry CEO told TechCrunch that it would be an "extremely lopsided change" giving a Game Center and iAds another advantage over their competitors. 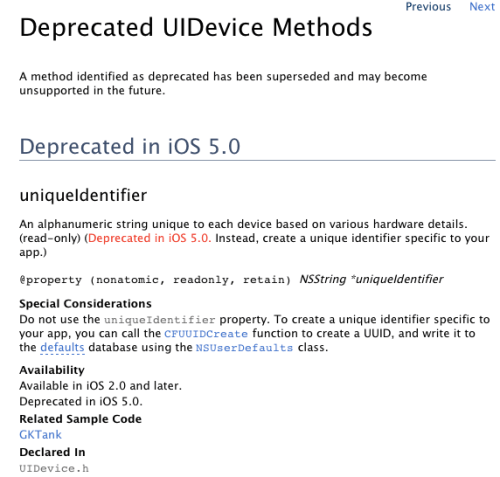 Roger - August 20, 2011 at 10:43am
It would be trivial to create your own tracking id and map it the existing UUID, so this is nothing major to worry about just more work for the developers.
Reply · Like · Mark as Spam
0

dancj - August 20, 2011 at 5:48pm
It wouldn't be hard, but it would require developers to update their software to associate teh UDIDs with the new IDs, and then for the users to download the update, and them for them to run the app before Apple take away access to the UDID. A load of data is going to get lost there
Reply · Like · Mark as Spam
Recent