Rip Dev has announced a new version of Installer.app for the iPhone and promised rapid updates to get it in shape as soon as possible.

What's new or fixed in this update...
- Added user-driven ratings. We encourage you to submit your votes for various packages. Once more data will be collected (in a few days), that will be reflected on the Featured page.
- SpringBoard is no longer terminated after the software was installed or removed.
- Proxies are (again) supported. The support was broken after we moved to libcurl.
- Introduced download timeouts (again) that were disabled after the move to libcurl.
- Reworked many parts of the engine in an effort to get rid of the occasional GUI stalls.
- If a particular source fails to update, it will be moved to "disabled" state for 6 hours and will not be included in the all sources refresh process. The disabled state is listed as the source icon with a red "stop" sign over it. This is done to prevent unnecessary stalls at the sources refresh if one of the sources goes offline for whatever reason. If you'd like to retry it before 12 hour interval, open its info and hit Refresh button there.
- Removed customInfo support as it was mostly used for unnecessary ads that were disturbing many people. These pages are normally reachable from the "More Info" link.
- Much better error reporting. Forget these "error 3"s and such. The descriptions are much more human readable now. And for script errors, it will show an actual script command that caused an error.
- Installer will prevent iPhone/iPod touch from sleeping when it's downloading or installing something.
- The app icon badge should behave better now.
- Lots of smaller fixes and optimizations I won't list. 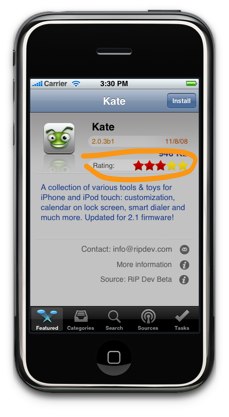 Rob - November 21, 2008 at 2:25pm
@Kyle Flanagan: Unfortunately the Mac version doesn't have an option to deselect installer in QuickPwn. I hope they add this option again as Installer is a piece of crap and I always have to manually uninstall it. //Rob
Reply · Like · Mark as Spam
0

BRIKZ - November 14, 2008 at 10:20am
Just the fact that the only thing this update does is "FIX ERRORS" should be enough to tell you to not install installer. It's like trying to sell an update to a car by admitting that the brakes didn't work, the wheels go flat a lot, and the engine stalls often, but this time we fixed it. Good luck installer, but ur not for me. I uncheck installer and don't install it when i jailbreak.
Reply · Like · Mark as Spam
0

Kyle Flanagan - November 13, 2008 at 12:23pm
Rob: Installer is checked by default in Quickpwn/Winpwn. You can still uncheck it during the unlock/jailbreak process. Having said that, nothing beats Cydia in 2.1. Way to go Saurik :)
Reply · Like · Mark as Spam
0

Iakupo - November 13, 2008 at 11:25am
It almost bricked my iPhone, it was stuck on an infinite loop. I managed to get it back by plugging it in to my pc and running Discaid which read the file system and magically fixed it.
Reply · Like · Mark as Spam
9 More Comments
Recent