Cook on Peter Oppenheimer's retirement:
- Apple is now more than 20 times the size it was when Peter became our CFO
- I'd like to thank him very publicly for his contributions to Apple
- He has never missed guidance in his 10 years as CFO
- Looking forward to working with Luca as Apple's next CFO

Q&A:
- Monetizing iTunes Accounts: I do believe we can monetize more than we are in existing areas and new areas.
- Could Apple charge more for highly innovative products in the future: We price things in such a way that we think is a fair price for the value that we are delivering.
- Key drivers for the June quarter: March quarter was good because of better volume, better costs than anticipated, and some favorable mix of products and services. For June, expecting loss of leverage from decline in revenue. Also expected less favorable mix. To offset that (partially) we will have some cost improvements.
- Within the U.S. did you see as much pressure from changes in U.S. carrier upgrade policies: We saw some pressure in the quarter because of stricter enforcement of upgrade policies.
- iPhone ASPs down a little over $40 - What drove that? - Half of that was we continue to do well in emerging markets with the 4S. The rest was primarily from a lower capacity mix.
- Cook: Some of the programs that carriers are running could serve to increase upgrade cycle. Some could cause users to keep phones longer. Balance is currently hard to conclude.
- Cook on iPad: Fastest growing in Apple's history. Was instantly a hit in all three markets: consumer, enterprise, education. It's almost twice as many iPhones sold in same period of time. We've come a long way very quickly. 95% share in education market. Focus is on penetration. Student achievement is higher with iPad in classroom rather than without it. In the enterprise, we are seeing 98% of the Fortune 500 using iPad. 91% of activations in enterprise is iPad. What we have to do in enterprise is focus on penetration but in terms of having people begin the process we are doing a pretty good job of that. In the retail market, we have 46% share. Office I believe does help. If it would have been done earlier it would have been better for Microsoft frankly. There are also of alternatives out there. I wholehearted welcome Microsoft to the app store to sell Office. Our customers are responding in a good way that it is available. Two thirds of people planning to buy a tablet are planning to buy an iPad. When I back up from all of these I feel great. That doesn't mean that every quarter, every 90 days is going to be a number that everybody is thrilled with, but what it means to me that the trend over time is very very good. The thing that drives us is the next iPad, the things that are in the pipeline. When I back up from all of this I can't but be extremely excited about where we are.
- Focus of Apple compared to Google, Facebook, Amazon: The key thing for us is to stay focused on things that we can do best and that we can perform at a really high level quality that our customers have come to expect. We currently feel comfortable in expanding the number of things we're working on and we're doing that in the background. I'm not ready to pull the string on the curtain. It means much more to us to get it right then to be first.
- We look for companies that have great people and great technology and that fit culturally. We don't have a rule that says we can't spend a lot. We'll spend what we think is a fair price. What's important to us is that strategically it makes sense. We're in a race to make the world's best products. You can bet that you will continue to see acquisitions.
- On Why Apple TV is No Longer a Hobby: When you look at Apple TV sales and when you look at content purchased, you're looking at $1billion+. We can't call something of that magnitude a 'hobby' anymore. We're making the product better and better. I feel good about this business and 'where it can go' 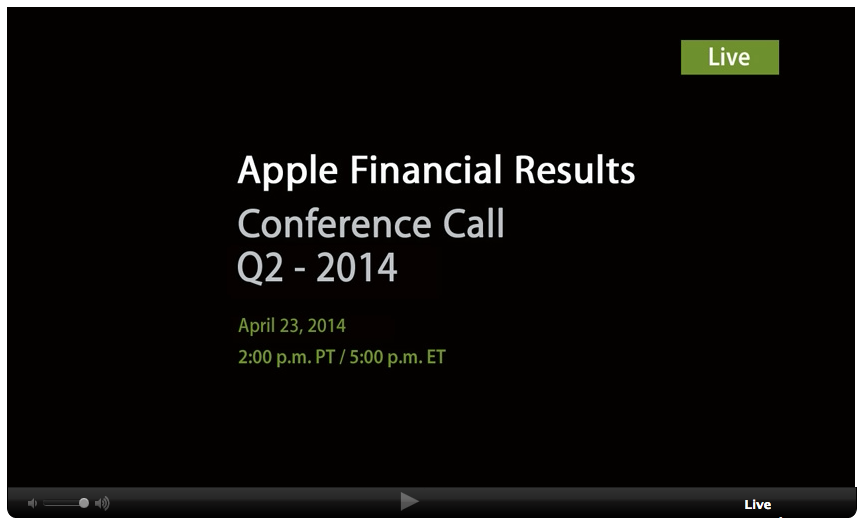