Purchase of the Starter Kit gives you the source code for the examples application. The modules that perform the functions remains encrypted but can be used in any of your projects without restriction.

As well as the module that can be used within your own projects, the source code for the examples application can be used to learn how to do things such as automatically creating a local SQLite database to store the locations and sizes of all the windows in your application, how to populate and react to events on a Listbox Control, use of Toolbars, Menus Etc. RBStarterKit1 also includes the Syntax Highlighter Module.

The Syntax Highlighter Module operates against any EditField in your REALbasic Application. As you type, your words are matched against a text file containing keywords, words that you wish to have highlighted in some way on your EditField, an example would be a SQL Query or a Language Editor.

Whatever you type in the EditField is highlighted if contained within your Keywords File. This text file can be easily created and then edited to include or exclude additional keywords. The Syntax Highlighter is supplied as an Encrypted RB Module which you include in your own applications.

Pricing and Availability:
The example application can be downloaded from Arten Science online. RBStarterKit is available to purchase for £30. 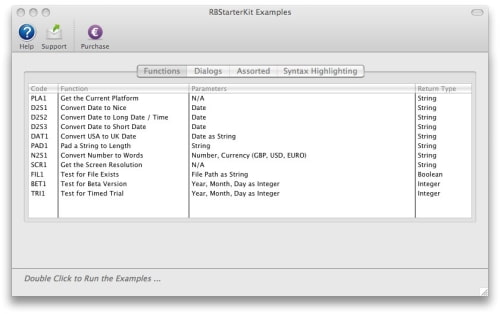