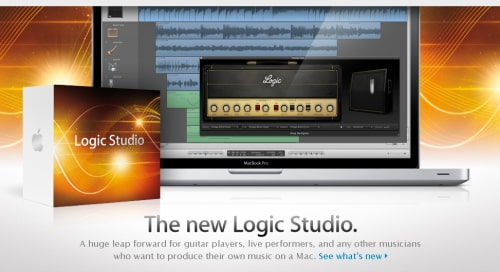 “The new Logic Studio is ideal for professional musicians, live performers and GarageBand enthusiasts who want to take their music to the next level,” said Philip Schiller, Apple’s senior vice president of Worldwide Product Marketing. “Guitar players are going to love Amp Designer and Pedalboard and the new Flex Time tools allow you to quickly improve your recordings and create tighter performances.”

The new Amp Designer and Pedalboard plug-ins give guitar players incredible new recording and sound design capabilities. Amp Designer recreates 25 legendary vintage and modern amp heads in beautiful detail with matching controls and 25 paired speaker cabinets that emulate the sound and feel of a guitar running through a real tube amplifier. Guitar players can create their own custom rig by mixing and matching amps, cabinets, reverbs and EQs, and can choose from three different microphone types that can be positioned in 3D space to capture the ideal guitar tone. Pedalboard adds an assortment of 30 guitar stompbox pedals that can be arranged in any order to produce a wide variety of lush, creative effects including overdrive, distortion, fuzz, delay, chorus, flange, phaser, tremolo, treble boost, wah and more.

Flex Time is a new collection of tools that allow musicians to quickly manipulate the timing and tempo of recorded audio, including vocals and instruments, to create tighter performances. Using the Flex Tool, individual beats in a waveform can be moved effortlessly with a mouse click, without the need for tedious slicing and editing. Audio Quantize can instantly fix or adjust the timing of an entire performance by aligning notes and beats to a musical grid with a single menu selection. Varispeed provides the ability to slow down and then speed up an entire multi-track production to help record challenging parts. Flex Time also enables recorded tracks to be moved between different Logic projects and matched together, even if they were performed at different tempos. All Flex Time edits are performed non destructively and in real time, even when using the highest quality settings.

MainStage 2 lets musicians use all the instruments and effects from Logic Studio to turn their Mac into the ultimate live performance rig. The new Playback plug-in provides musicians with a backing band, allowing them to perform with pre-recorded audio, like drums, sound effects and other accompaniments that can be triggered to play while they are performing live. The new Loopback plug-in allows musicians to record, layer and jam along with their own performance so a single musician can lay down a rhythm and then play a lead over it.

Soundtrack Pro 3 adds powerful new audio editing tools including Voice Level Match which extracts volume information from the vocal content of one clip and applies it to another without altering any other audio content, so editors can easily correct mismatched voice levels. An enhanced File Editor includes new tools to make sophisticated edits and fine tune volume adjustments by targeting specific frequencies such as the rustle of a paper or the bump of a desk without affecting dialogue. The new Advanced Time Stretch feature stretches and compresses audio with incredible precision using three Apple-designed algorithms or other algorithms available as third party plug-ins. Soundtrack Pro and Compressor are also available as part of the new Final Cut Studio®, allowing Final Cut® and Logic users to collaborate and share files. 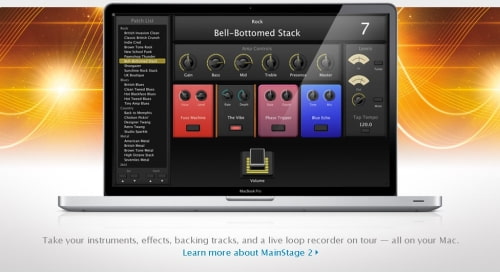