A new report from Re/code says sources within Apple confirm that the company is throttling the Qualcomm LTE modem in the Verizon iPhone 7.

As soon as the iPhone 7 was released users began notice a difference in download speeds between the Verizon iPhone 7 which features a Qualcomm MDM9645M LTE modem and the AT&T version which has an Intel XMM7360 modem.

Cellular Insights performed tests which concluded that the average performance delta between the two is in the 30% range in favor of the Qualcomm variant.

Recently, Bloomberg reported on testing by Twin Prime which determined that although the Verizon model is faster than the Intel model, it still is not as fast as it could be. The Samsung Galaxy S7 which also uses the Qualcomm X12 was about twice as fast as the iPhone 7 running on the same network with the same modem chip.

“The data indicates that the iPhone 7 is not taking advantage of all of Verizon’s network capabilities,” said Gabriel Tavridis, head of product at Twin Prime. “I doubt that Apple is throttling each bit on the Verizon iPhone, but it could have chosen to not enable certain features of the network chip.”

Now, sources tell Re/code that it's true, Apple has limited the speed of the Qualcomm modem in the Verizon iPhone 7 to make it perform at about the same speed as the Intel modem.

Apple supposedly did this for a simple reason: It wanted the cost savings and flexibility of having two chip sources but also wanted the different versions of the phone to be as similar as possible (to avoid angering AT&T and T-Mobile and their customers in the U.S., for example).

Apple's official comment on the matter: “Every iPhone 7 and iPhone 7 Plus meets or exceeds all of Apple’s wireless performance standards, quality metrics, and reliability testing,” Apple spokeswoman Trudy Muller said. “In all of our rigorous lab tests based on wireless industry standards, in thousands of hours of real-world field testing, and in extensive carrier partner testing, the data shows there is no discernible difference in the wireless performance of any of the models." 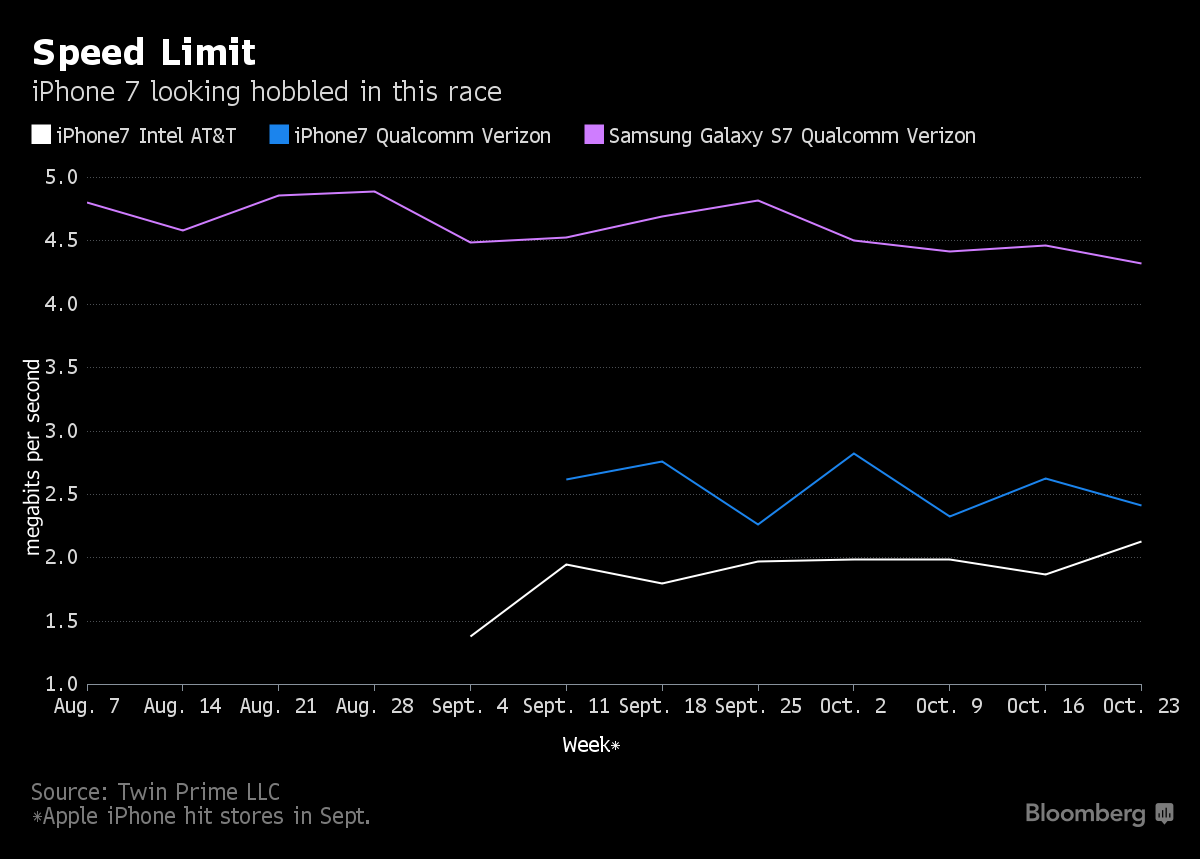 Defective Intel Chip slow speed dropped calls - November 20, 2016 at 4:54am
right ! Forgot to Mention thing about this article they do not mention that I forgot to put in the last comment is that they disable !!! !! EVS HD voice that tmobile services offer But can no longer get if you purchase the new iPhone 7 or 7+ But possibly disabled the feature for all iPhones my question is did they disable this feature and slow the QUALCOMM speed down on all iPhones Not just the seven ?? ??? Maybe possibly we might see them slowing the operating speed down to the iPhone 2G A.k.a. Known as that iPhone 1 It's hard to even load a webpage or a YouTube video on LTE you can forget about it Apple needs to stop screwing over their customers and give people what they want and do not sell different models with different chips of iPhones But I think there's a more point to this why did they choose to use these phones AT&T and T-Mobile is it because they did not want their services roaming on other networks therefore they do not have to pay the networks that they are roaming on Therefore AT&T and T-Mobile saving money What's really going on ??????
Reply · Like · Mark as Spam
0

Defective Intel chips Slow speed dropped calls - November 20, 2016 at 12:08am
Had my iPhone 7 Plus replaced Less than 3 weeks old could not return to tmobile had to get it swapped out with a refurnished !! phone Because of the phone kept dropping calls I am a business owner of a electronics technician business I fix Apple phones all the time I knew it had to do something with the Intel modem chip !!! Noted when I went to the Genius Bar the person did not want to swap out my phone also they said the only thing you can do right now is sell it on eBay or craigslist what kind of Apple employee tells a customer that when they just spent a lot of money on the new phone and replace it with a refurbished one not matching the serial number of the box I purchased Noted the defective phone was very slow Loading Internet pages and data Same with this one but not as bad they replaced it with the same tmobile Intel chip iPhone The phone is way slower than iPhone 6s !! If I would have knowing this issue I probably would not have purchased the iPhone 7 Plus I would have purchased the unlock my don't directly through Apple Knowing at that I would have slower connective speeds also last bars of service very weak Signal reception A Nother pissed off loyal customer that they screw over Starting to see a new trend that Apple does not care about their customers !! How do they get away with not able to return my phone in a 30 day. Like other electronics that are being sold I had no other choice but to get my phone swapped out with a refurnished phone not cool not happy
Reply · Like · Mark as Spam
6 More Comments
Recent