Apple has registered two new Mac models with the Eurasian Economic Commission (EEC), notes Consomac. It's possible these new models are the much anticipated 14-inch and 16-inch M1X MacBook Pros.

The famous Eurasian Economic Commission continues to unveil Apple's recordings several weeks ahead of their release! This time, it is about two models of Macs which have just obtained their authorization for sale in Russia: they are numbered A2442 and A2485 and run under macOS 12 Monterey. Apple's repository includes many more model numbers, but these are already known SKUs that are simply being updated to take into account the new version of macOS , which is slated for release this fall. The models A2442 and A2485, on the other hand, do not correspond to any existing Mac.

The MacBook Pros are expected to arrive between September and November. Rumors have the notebooks getting a flatter design with reduced bezels, a 1080p webcam, SD card reader, three thunderbolt USB-C ports, MagSafe, and HDMI. They're also said to feature an M1X processor that offers more thunderbolt channels, cpu cores, gpu cores, multiple monitor support, and more. Finally, Apple could update the notebooks with a mini-LED display. 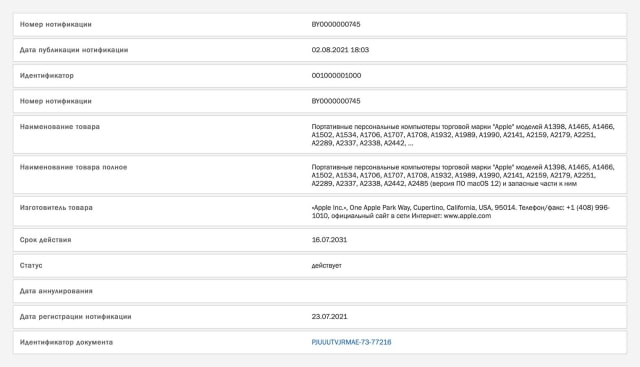