The first public beta of Sileo 2.2 has been released and it features a slew of changes and improvements including official support for all jailbreaks. Sileo is an APT package manager designed for jailbroken devices.

New Features:
— A redesigned package install page designed to show you exactly whats happening
— A new button cancelling downloads so you can change or remove items from the queue
— iCloud Profile Pictures on Featured Page is back
— New button in package depictions to go to that repo
— Added an alert for adding dist repos with special handlers for BigBoss and Procursus, Adding "https//bigboss.org/ "will add BigBoss correctly for you
— Support for Canister on the featured page
— Improved trackpad support and support for cmdR and cmd + on the Sources Page
— The ability to change language inside Sileo
— The ability to add installed packages to the wishlist
— Added support for sorting by size in Installed Packages
— Holding on a file location in Package Contents gives you the option to Copy Path and Open in Filza (If it's installed)
— Installed Packages category has been added for each repo
— Add Footer in Sources page with source count
— Added option to always show install log
— Improved error messages and handling
— 3 new app icons, thanks to @clam ass mf and @cameren

Support for all jailbreaks
Sileo now officially supports all jailbreaks. Coolstar jailbreak users should continue to use Procursus to download Sileo, other jailbreaks can use the repo https://repo.getsileo.app, Thanks to @cameren for helping with this'

Performance Improvements
Lots of the core components of Sileo have been rewritten to give you a much more fluid experience. This includes faster repo refreshes, faster queue load times and no Ul hitches. Sileo will now use significantly less memory. This has been helped by increased caching and using faster libraries for decompression and support for repos using .zst.

Known Bugs
— Installed Packages may sort incorrectly at launch (re-select your sort)
— The new page may sit spinning forever (restart the app)
— lf selecting a custom language in Sileo, some buttons may have the incorrect language
— Restart Sileo may not appear and will just show done, please restart Sileo manually
— Spamming Cancel Download may have undefined consequences
— Pressing clear queue may have undefined behaviour
— Chariz may through a hash error on refresh, refresh again to bring packages hack
— Package Search doesn't work when you go to the installed packages of a repo

More details about Sileo can be found at the link below... 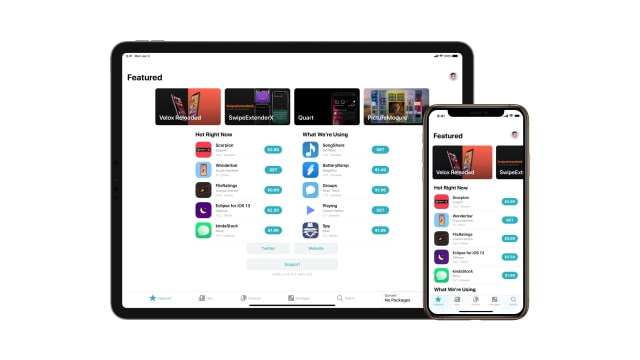