Although Apple won must of its initial legal battle with Epic Games, the company was ordered to allow developers to link external payment options. It filed an appeal but requested that the injunction be stayed until after the appeal.

In short, Apple’s motion is based on a selective reading of this Court’s findings and ignores all of the findings which supported the injunction, namely incipient antitrust conduct including supercompetitive commission rates resulting in extraordinarily high operating margins and which have not been correlated to the value of its intellectual property. This incipient antitrust conduct is the result, in part, of the antisteering policies which Apple has enforced to harm competition. As a consequence, the motion is fundamentally flawed. Further, even if additional time was warranted to comply with the limited injunction, Apple did not request additional time other than ten days to appeal this ruling. Thus, the Court does not consider the option of additional time, other than the requested ten days.

The judge also dismisses Apple's claim that allowing external links to third party payments would cause injury to public interest.

The third and fourth elements overlap so the Court addresses them collectively: injury to other parties and public interest. The evidence from the trial revealed that the party who would benefit primarily from a stay pending all resolution of all appeals is Apple. The Court can envision numerous avenues for Apple to comply with the injunction and yet take steps to protect users, to the extent that Apple genuinely believes that external links would create issues. The Court is not convinced, but nor is it here to micromanage. Consumers are quite used to linking from an app to a web browser. Other than, perhaps, needing time to establish Guidelines, Apple has provided no credible reason for the Court to believe that the injunction would cause the professed devastation. Links can be tested by App Review. Users can open browsers and retype links to the same effect; it is merely inconvenient, which then, only works to the advantage of Apple.

Additionally, Apple's request for an additional ten days was denied.

Thus, the Court sees no need for an additional 10 days for Apple to file its appeal of this ruling. Granting this extension would extend the deadline to the end of December just before the December holidays which itself is inconvenient.

Apple has until December 9th to implement the change. You can read the full order at the link below. 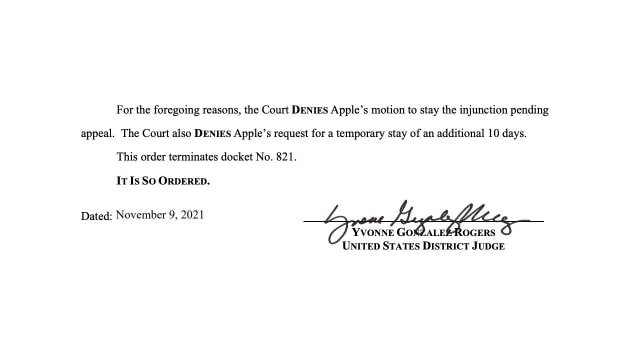