Apple has become the world's second largest buyer of microelectromechanical system sensors for consumer electronics , according to IHS iSuppli.

Apple purchased US$195 million worth of consumer/mobile MEMS sensors in 2010, up 116.7% from US$90 million in 2009, IHS said. The vendor overtook Nintendo, and trailed leading purchaser Samsung Electronics by just US$5 million.

"Consumers in 2010 happily bought up Apple products including the iPhone 4, the iPad and iPod Touch," noted Jeremie Bouchaud, principal analyst for MEMS at iSuppli. "Much of the appeal of these products lies in their sophisticated user interfaces, which rely heavily on MEMS sensors, specifically accelerometers, gyroscopes and microphones. This caused Apple's purchasing to boom in 2010." 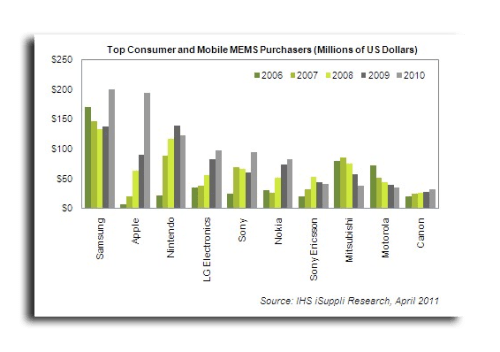