U.S. Army is wrapping up a six week program to test the viability of smartphones and tablets in combat, according to CNN.

The program began on June 6 at the White Sands and Fort Bliss training areas in New Mexico and Texas. Officials were impressed at the results and say that soldiers may be sent overseas with smartphones later this year.

The phones are used to text message updates about their surroundings, send pictures with GPS locations, view maps, and fill out reports.

"When they have a problem or need to submit a report, they default to the texting," said Michael McCarthy, an Army director for the program. "These young soldiers grew up with this technology. They're very familiar with it. They're very comfortable with it."

So far the troops have performed tests with more than 300 Android, iPhone, and Windows Phone units. Tests are also being performed with tablets from Apple, Dell, and HP. A separate Army division is testing a special version of Android OS running on a device called the Joint Battle Command-Platform Handheld.

"We're looking at an assortment of devices," McCarthy said. "All the phones we've tested are pretty good."

One of the main issues with smartphone deployment is securing their transmissions. The Army is testing a "cell tower in a suitcase" which creates a limited range wireless network.

"Today, we don't have the level of encryption that we would need to take (a phone) overseas and fully integrate it into our mission-command systems," Mazzanti said. Still, "there could be some limited deployments even this year, tied to tactical radios that supply the encryption that's needed." 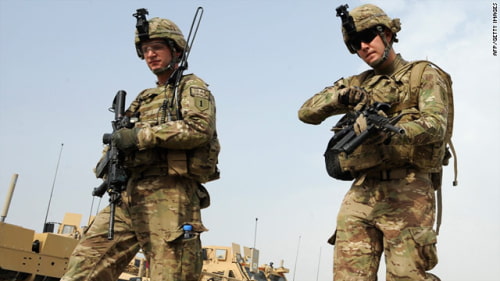