Multiple PayPal users have been incorrectly charged for purchasing Mac OS X Lion from the App Store. One user claims to have received a bill of nearly $4,000 for the $30 software.

The glitch will show up in PayPal accounts as multiple $29.99 charges, however in Apple's purchase history, there is only one purchase. Users have reached out to Apple, but have not been able to get a refund yet. Both companies are blaming each other for the overcharge, but are claiming that they are investigating.

The story started on the Official Apple Support Forums which was filled with users who were mistakenly overcharged for Lion. So far this problem has only been connected to users who have a PayPal account. Paypal says the multiple charges came from the iTunes store, but Apple claims the iTunes store only charges users once.

Some have reported getting hit with overdraft fees and other charges because of the mistaken multiple charges. Fortunately, Apple is investigating the cause of this glitch, but for now we recommended not using PayPal to purchase Lion from the App Store. 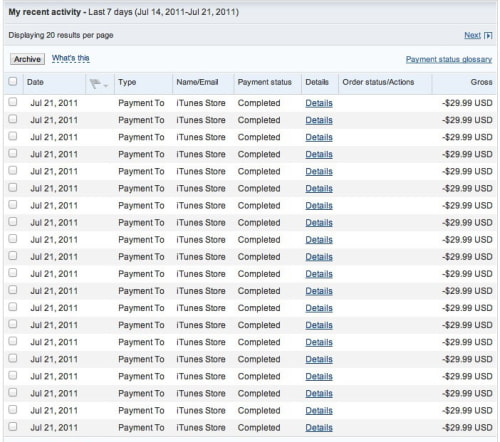 Sub Han Widjaja - July 29, 2011 at 1:45pm
They are both Liars. No wonder blaming each other. It happened to me when purchased an iPad in Sydney. Apple never gave an invoice tax but instead of apologize, he said it's already been sent and email. Paypal hold my money recently for weeks for no reason. Paypal could not answer when I called asking why they did that. Blaming on the supplier. Then I emailed the supplier. He did not hold my money, not even a dime. It is kind of a culture. Paypal stole your money and hold it for weeks, trying to be a f.... robinhood.
Reply · Like · Mark as Spam

Hirok Ghosh - July 28, 2011 at 8:40am
Apple Fucks up once more.... Is Apple going the way of the Microsoft finally? When the company grows bigs and success is generally blooming, is this what happens? Patent trolling... Over-changing customers... Crappy Software or buggy software (Apples Pro Video Editing Programme comes to mind..._ Well give apple some lee-way but for how long?
Reply · Like · Mark as Spam

Anonymous - July 28, 2011 at 5:42am
This is why us Anonymous is boycotting paypal. They think they can do whatever they want when ever they want and get away with it. Join us to fight back against PayPal. http://pastebin.com/LAykd1es Never Forget, Never Forgive, Anonymous 4ever.
Reply · Like · Mark as Spam