The iPad 3 appears to taper more gradually with the camera on the taper itself.

The iPad 3 enclosure seems to have a more gradual taper to the edges than the iPad 2. The taper is seen better on the top overview photograph. As a result of this longer taper, the iPad 3's camera rests on the taper itself. We saw this before but due to the dark lighting of that image, the taper seemed more exaggerated.

The absolute positioning of the camera doesn't seem that far off from the iPad 2, but the lens does appear larger. According to NextMedia, the new iPad 3 camera will see a significant upgrade to 8 megapixels. The current iPad 2 back camera is 1 megapixel in resolution

Recently the site also posted microscopic images of the purported iPad 3 LCD that showed it to be a Retina Display. 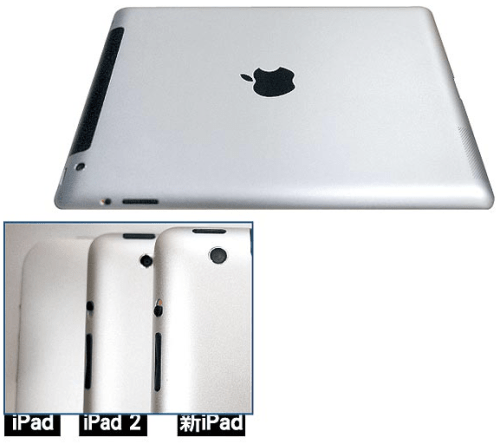 scamster - February 20, 2012 at 7:04am
You Samsung bell ends the camera is not just for taking photos and shooting video but also augmented reality. Besides what are you doing on an Apple forum?
Reply · Like · Mark as Spam

scamster - February 20, 2012 at 6:48am
To take advantage of the rumoured Retina display the next iPad is proposed to have, there would have to be a significant jump in quality of camera. My guess would be the same or similar to the one used in the iPhone 4S.
Reply · Like · Mark as Spam

scamster - February 20, 2012 at 6:58am
ascetically I would have to agree with you but with the tapered edge its ergonomic design will allow it to have a more comfortable hold, give a sense of lightness and thinness.
Reply · Like · Mark as Spam