Richard Gaywood takes a look at the math to determine how close various Apple devices are to a Retina Display and whether a 2048x1536 iPad makes the cut, in a recent TUAW article.

Gaywood notes that in the viewing angle diagram below, a, is called the angle subtended by the inter-pixel spacing, s. Whether or not a pixel can be discerned is based on the size of this angle. The size of the angle changes as you move a screen closer or further from your eye. One arcminute, or an angle of 1/60th of a degree, is considered the resolution limit of a typical human retina.

Next, Gaywood took the average viewing distances and resolutions of various Apple devices and calculated how close the subtended viewing angle was to one arcminute.

The iPhone 4 screen at a typical distance of 11" is just barely above the threshold for a Retina display. I believe this justifies my methodology. Secondly, it repeats my previous conclusion that a pixel-doubled iPad running at 2048x1536 is easily enough definition to count as a Retina display -- even at a 16" viewing distance, which is on the close side from my experimentation with an iPad and a tape measure. Similarly, that Asus tablet is a Retina display too.

It also shows that many current Mac displays are a lot closer to Retina display levels than you might have thought. The 27" iMac at a distance of 28", a 17" MacBook Pro at 26", an 11" MacBook Air at 22" -- these screens all have pixels small enough to border on invisible.

Hit the link below for a much more detailed explanation of these calculations. 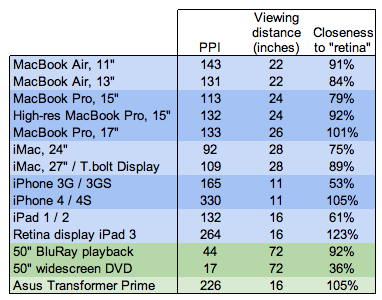 Dancj - March 3, 2012 at 10:40am
Except for two small details. 1 - Apple get to decide what fits a term they invented. 2 - you're completely ignoring why Retina Display is called Retina Display. It makes perfect sense to take distance into account.
Reply · Like · Mark as Spam

Ahmed Osama - March 4, 2012 at 3:05am
Well, u said it your self, they can name it as they want, because they invented it. But, when we start to compare things, we have 2 put them in the same conditions, u can't say that X passes as a Retina Display from Y distance, and Z passes from B distance, u have to compare them both in the same distance, which bring us back to the pixel density which is the real factor :) 336 pixels/inch
Reply · Like · Mark as Spam
3 More Comments
Recent