Although he refuses to release his jailbreak publicly, I0n1c has posted an image of a jailbroken iPad 3 on the newly released iOS 5.1.1 firmware. 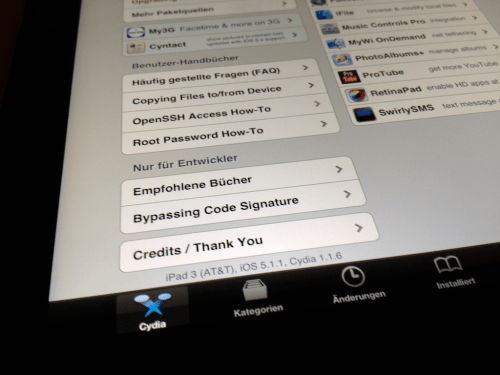 Furian - May 10, 2012 at 9:16am
I don't know but why is i0n1c not releasing the jailbreak for iPad 3 on iOS 5.1.1 if this continue the way it's going looks like the public donations to any jailbreak hacker will get lower and lower, and finally the fun is over
Reply · Like · Mark as Spam

Kool Guy - May 8, 2012 at 8:28pm
Well all I know is too bad we lost comex. He was d 1 who was responsible for many previous jailbreaks. Some on his own too with no team. Apple is fast at recruiting. But weird that they only offered him internship n not even a real position. Why would he take a small position n left his super hero status in the jailbreak community. Maybe we need to organize a donation fund n find a way to send it to these guys.
Reply · Like · Mark as Spam

The Man - May 8, 2012 at 4:51pm
I think that all you guys must be on crack. There is no fucking way that half of you guys can even figure out how to turn on an iPhone (or any smartphone, for that matter). Your mothers (that you still live with) had to help you boot up your computers. What a bunch of crackers.
Reply · Like · Mark as Spam

Johnq - May 8, 2012 at 7:43pm
Are you related to l10nic? Do you think is a good normal behavior what he's been doing to the community? If he doesn't want to release the jailbreak that's fine but why make fun of everybody who can't do what he's able to do?
Reply · Like · Mark as Spam

The Man - May 8, 2012 at 8:07pm
Nope, not related in the slightest. His behavior is what it is. He makes no claim whatsoever that he has a program that you or I could use to jailbreak our phones. He claims to have an exploit that an extremely skilled iOS programmer (such as himself) could use to jailbreak their own phone. If he were to release the details of that exploit, very few of us would be able to jailbreak our phone. That is why a third party has, in the past, written a turnkey program to actually perform the jailbreak. At this time, no third party has deigned to write such a program for 5.1. Why not? Is it because nobody knows what exploit he is using? Possible, but not very likely. In truth, it is that lack of a third party which is the problem for us, not i0n1c. He has never written such programs and I don't expect that he will now either. Nevertheless, what is really crazy is the belief on the part of many people that they are entitled to such a turnkey program. I can't for the life of me understand such an attitude. Am I entitled to use their iPhone, if I can't afford my own?
Reply · Like · Mark as Spam
62 More Comments
Recent