New rumors now indicate an all new iPod touch that Apple is preparing to reveil along with the new iPhone. The Japanese blog Macotakara claims to have the scoop on the fifth generation iPod touch.

According to their source, the new iPod Touch will sport a larger screen of 4 inches, the same as the new iPhone Apple plans to announce. Furthermore, the new iPod touch could have the same A5 processor found in the current iPhone 4S, and possibly a bump up to 512mb of ram.

Finally the site claims that the back casing has a new buffed aluminum design, and is not the current mirrored finish that scratches so easily. Apparently the source said there was an additional hole on the lower part of the back case, but has no idea what the hole is.

Information regarding a new iPod Touch does fall in line with what he have been hearing. 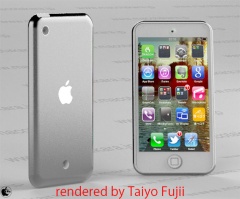