Apple's new Maps application has an additional besides less data consumption, it also caches a much larger area for offline browsing, reports AppleInsider.

With Google Maps in iOS 5 you could only browse about a 10 mile radius when offline; however, the more data efficient vector maps in iOS 6 means you can view a far larger area when offline.

Apple's new vector maps, once loaded in San Francisco, allowed us to browse an entire continent of high level maps (state outlines) while offline, north from Anchorage, Alaska to Lima, Peru and from Honolulu, Hawaii to Montréal, Canada.

At a highway level detail, we could actually navigate most of California, and on a simplified level, the western half of the United States. There were detailed street-level maps available of areas we'd never even looked at while online, as far away as Salt Lake City, Utah (about 740 miles or 1200 km east). Thanks to vectors, you can even view these offline maps in 3D perspective.

Notably, Google Maps for Android does use vector graphics but the site found automatic offline caching is quite poor. Only 49 sq mi of San Francisco showed up after losing connectivity.

"Major highway routes degraded to a blocky mess within ten miles of our loaded location, and even city names disappeared after 40 miles (64 km). Highway 101 vanished into dead ends just 70 miles outside of San Francisco."

However, Google Maps for Android does let you manually save an area of about a 50 mile radius for offline viewing.

It's thought that if or when Google Maps comes back to iOS as a native application, its features will be similar to the Android version. 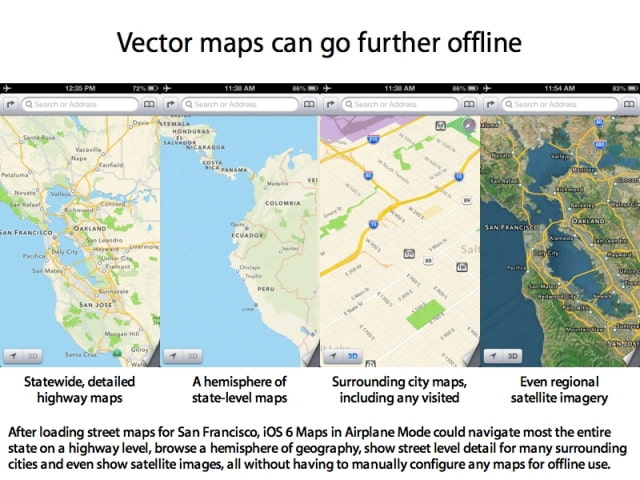 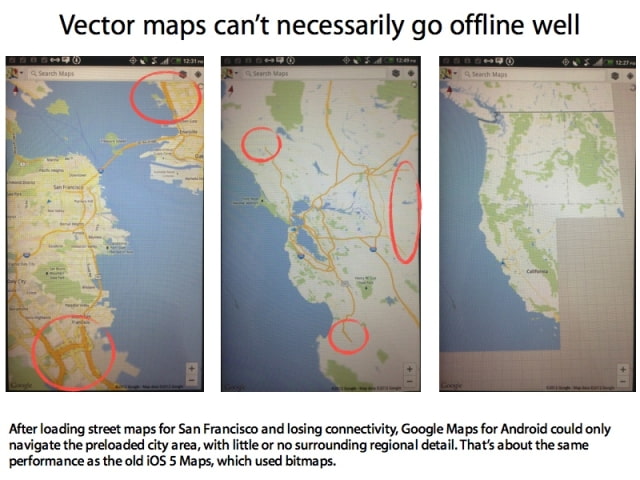 Tim Cock - October 6, 2012 at 2:40am
Google took so many years to gather the map data's to make it as much as accurate as possible all over the world. It is a unknown teritory for apple and they will never complete their map app in a fee months or years like what the apple fanatics were hoping for!
Reply · Like · Mark as Spam

Devon - October 5, 2012 at 11:38pm
Awh, what's wrong? Apple did something better than Google and now you're whining about it. Honestly stfu you're making yourself look stupid.
Reply · Like · Mark as Spam

WTF - October 6, 2012 at 6:38am
It is you who who looks stupid, the simple fact is that Apples maps are poor compared to Googles. Open your eyes and compare them side by side
Reply · Like · Mark as Spam
17 More Comments
Recent