According to a Nielsen study, Apple devices make up four out of the top five gifts American kids aged 6-12 want for Christmas.

---
Approximately half the children surveyed expressed interest in the full-sized iPad (up from 44% last year), and 36 percent in the new iPad Mini. The iPod Touch and iPhone are also coveted devices among these young consumers (36% and 33%, respectively). Kids are also likely to ask for dedicated gaming hardware this holiday, with 39 percent excited to own Nintendo’s just-released console offering, Wii U, and 29 percent indicating they want a device from that company’s portable DS family. Microsoft’s Xbox 360 and Sony’s PlayStation 3 also proved appealing, with approximately one-quarter of kids 6-12 saying they want these high definition consoles.

Among consumers aged 13 and older, tablets and full-sized computers were the top electronics choices, with roughly one in five indicating they want to acquire the iPad (vs. 24% last year), any other tablet, or a computer. Reinforcing the notion that the tablet market is one to watch, non-Apple devices—lead by Amazon’s Kindle Fire and Samsung Galaxy offerings—proved nearly as desirable as the iPad among teens and adults, while e-readers showed a slight decline in interest from 2011. Consumers 13 years and older were also interested in purchasing the Wii U, the iPhone and Internet-enabled TVs.
---

Take a look at the charts below for the full breakdown. 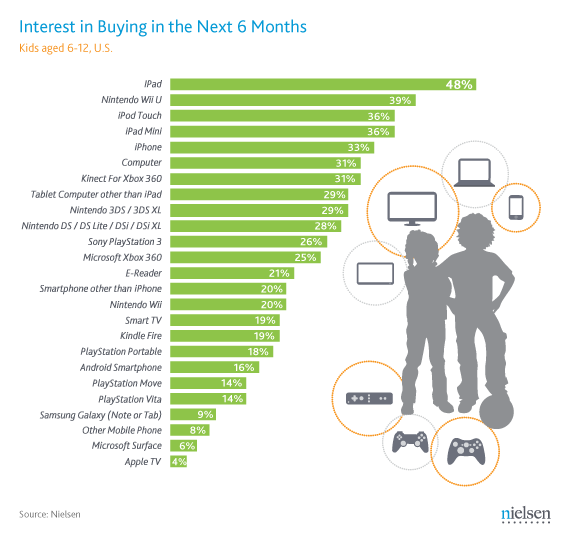 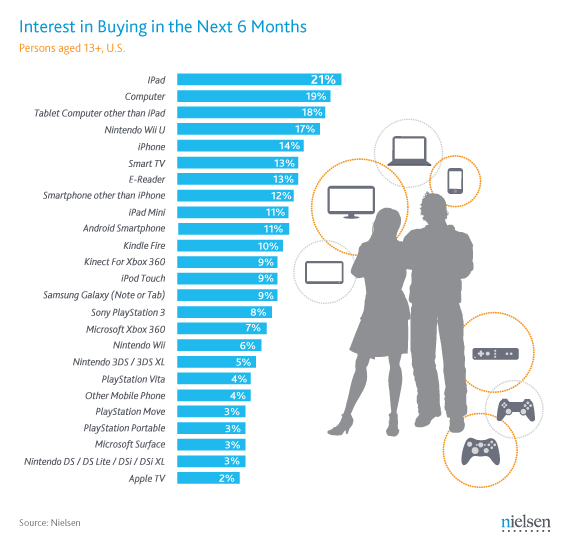 Duh! - November 21, 2012 at 1:05am
No shit!! smart parents are going to buy Ipads and Iphone5 for their children. Stupid parents like androids parents. Are going to go with $199 tablets.Walmart should come up with a tablet. Call it tablet for dummies..lol!!!
Reply · Like · Mark as Spam

Josh - November 22, 2012 at 11:36pm
I doubt buying a kid an iPhone is feasible, and don't try and call anyone "stupid" after the atrocity of a comment you just wrote.
Reply · Like · Mark as Spam

Josh - November 22, 2012 at 11:35pm
Yeah! There is no other phones in the world except iPhones and Androids!! Oh wait, BlackBerry, Windows Phone
Reply · Like · Mark as Spam
1 More Comment
Recent