Google is reportedly planning to open its own stores by the end of the year. Citing an 'extremely reliable source', 9to5Google says the company wants to have its first flagship Google Stores open for the holidays in major metropolitan areas.

The mission of the stores is to get new Google Nexus, Chrome, and especially upcoming products into the hands of prospective customers. Google feels right now that many potential customers need to get hands-on experience with its products before they are willing to purchase.

While Google already has Chrome store-within-a-store locations inside Best Buy, the tech giant decided it needed its own stores when looking at how to market Google Glass. Apparently, they feel customers will need to try Google's new glasses first hand in order to make a purchase. 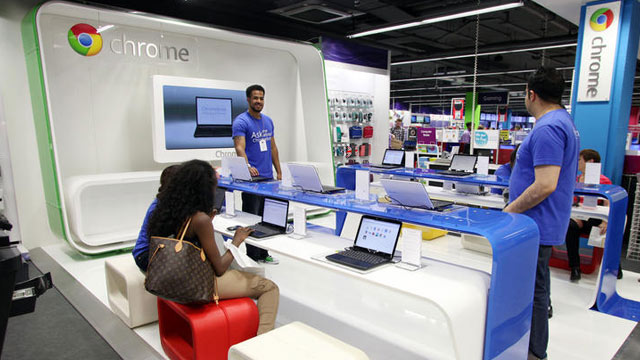 justabrake - February 16, 2013 at 12:45pm
If there was a choice to get a job in apple or google 100% of the people would all choose google Not many products but they are very good to their employees
Reply · Like · Mark as Spam

John - February 16, 2013 at 3:52pm
How do you know this to be true. Have you worked there? Know somebody that works there? If all your answers were no then you're just talking out of fandroidism.
Reply · Like · Mark as Spam

justabrake - February 16, 2013 at 5:31pm
well if you do a search you'll find @ glassdoor dot com they pick google being number 6 and apple number 34 to work for it's always been google as in the top ten company's to work for just google it
Reply · Like · Mark as Spam

PaulMOGG - February 16, 2013 at 12:12pm
Well done google bet you will copy everything except you don't have the product to seek well guess you must have billions of surplus money that you don't need which will keep the stores going for a while ... Do make sure you get the most expensive real estate and maybe give lots and lots of amazing food and drink for free and free goodies free lucky draws that will bring people in for sure !
Reply · Like · Mark as Spam

fleb - February 16, 2013 at 3:38am
I feel android would be so much better if google only "made" the phones. Too many models and crap cheap ones have ruined android.
Reply · Like · Mark as Spam
3 More Comments
Recent