A new generation of full-size Flagship Tablets has just started with the near simultaneous launch of the Apple iPad Air and Amazon Kindle Fire HDX 8.9. They both have top-of-the-line and state-of-the-art displays that have been significantly improved (in different ways) from the 2012 models. The Google Nexus 10 is another innovative Flagship Tablet that launched at the beginning of November 2012, so it’s now a bit overdue for an annual makeover, which is rumored to be happening sometime during November 2013. We’ve included it here even though it’s at the end of it’s product cycle because it has been a leader in this class, and will illustrate the changes in Tablet displays that have taken place in just the last year.

The most notable takeaway from the report is that Apple has finally moved to the long rumored IGZO display.

Compared to the fourth generation iPad, the screen Reflectance decreased by 23%, the Peak Brightness increased by 7%, and the Contrast Rating for High Ambient Light increased by 32%. Absolute Color Accuracy and Image Contrast fidelity are also very good. Apple's switch from a-Si amorphous Silicon LCD to a much higher performance IGZO LCD backplane produces an impressive 57% improvement in display power efficiency and will likely reduce the warming effect noticed with previous iPads.

DisplayMate concludes that despite the iPad Air's impressive display, the Kindle Fire "leapfrogged into the best performing Tablet display that we have ever tested, significantly out-performing the iPad Air in Brightness, Screen Reflectance, and high ambient light contrast, plus a first place finish in the very challenging category of Absolute Color Accuracy."

Check out the full report at the link below... 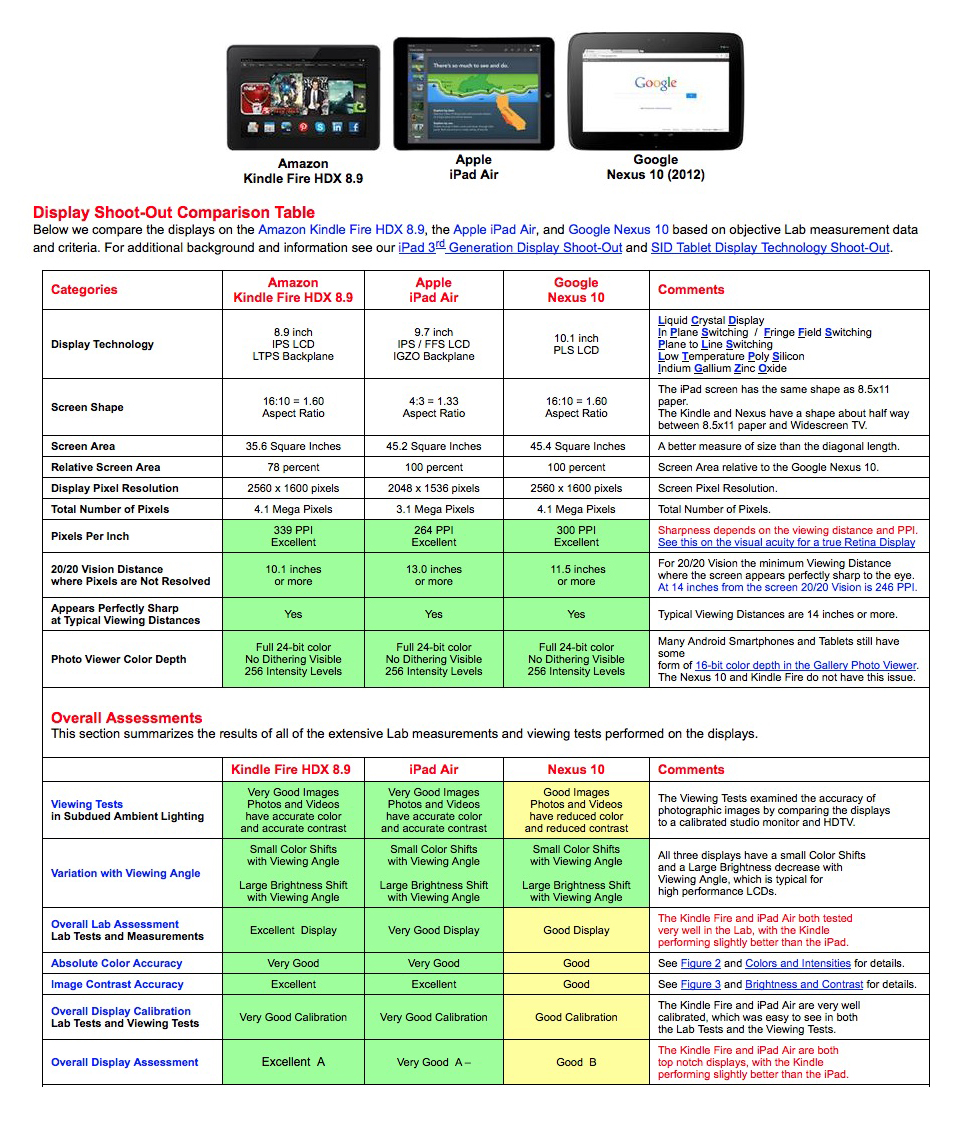 Delusion - November 6, 2013 at 11:43am
Ok guys just to let you all know Yes I'm .Steve God... Steve Heaven...TheRealNoGoodNick...Steve in Heaven, Nasty Nate...RatGT ...and a few more that I'll keep a secrete. So all you fu€kshits can go back to your troll Samfag troll site and keep your comments about me to yourself.
Reply · Like · Mark as Spam

Delusion - November 6, 2013 at 7:15pm
By the way, this pretty much explains Apple sheeps are out of excuses to say. You know im right and all you can do is pretend to be me. Hahaha loser
Reply · Like · Mark as Spam
7 More Comments
Recent