MuscleNerd has confirmed that iOS 7.0.4 is safe to update to for those who await an iOS 7 jailbreak.

Those at 7.x waiting for JB, maybe treat 7.0.4 as exercise in restraint. Won’t affect JB if you slip up, but test your ability to avoid it!

…but for those enjoying the 6.x JB, avoid 7.0.4 . There’s no going back (always worth saying that for sake of JB newbies)

The last update we received about the possibility of a jailbreak was in early October when Planetbeing tweeted, "We're still working hard on the jailbreak. May have all the pieces at this point (but not certain yet)." 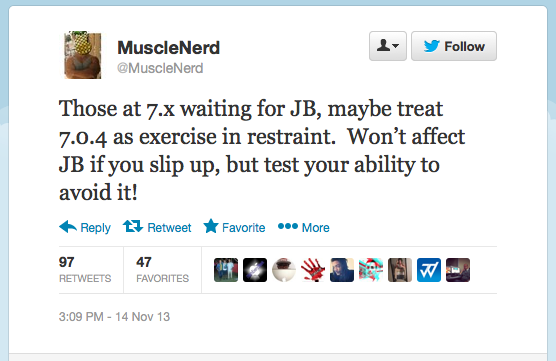 SNATTYZ - December 21, 2013 at 3:11pm
Yesh! so true wow man. Jailbreak is ios Root is android because it is based on unix or linux or ubuntu or something like that XD
Reply · Like · Mark as Spam