Some have speculated that Apple would maintain the current 326 ppi density, and bump the resolution to 1334 x 750. However, according to the report, Apple plans to triple the 'base' number of pixels on the iPhone screen from 568 x 320 and expand it to 1704 x 960. This would keep the current 16:9 ratio of the iPhone and keep the Retina branding.

Apple is preparing to make another significant screen adjustment to the iPhone. Instead of retaining the current resolution, sources familiar with the testing of at least one next-generation iPhone model say that Apple plans to scale the next iPhone display with a pixel-tripling (3X) mode.

This means that Apple will likely be tripling the aforementioned “base resolution” (568 x 320) of the iPhone screen in both directions, and that the iPhone screen resolution will be scaled with an increase of 150% from the current 2X resolution of 1136 x 640. Of course, Apple tests several different iPhones and display technologies, so it is possible that Apple chooses to take another route for display specifications for the 2014 iPhone upgrade.

The larger screen would mean iOS's user-interface will become larger and sharper unless Apple decides to optimize iOS for the larger screens. Sources claim that core user interface elements will simply appear larger than what we currently see on iPhones today.

Apple has been testing this resolution, however it is not clear if it has decided to go with it for the final product. The iPhone 6 still is a few months away, but you can expect a faster A8 processor and an upgraded camera to come along with the new phone. 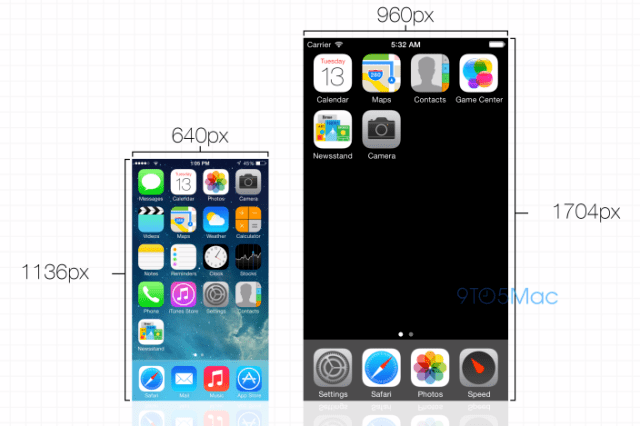 Apple Shit - May 15, 2014 at 11:43pm
I am sick of all this Could've, Would've and Should've it's so fuking apple, iclarified it's the worse, they have brains full of apple shit as well as all Apple Trolls.
Reply · Like · Mark as Spam

Samsung Shit - May 16, 2014 at 12:33am
The only shit to act and always act and ignore reality of being one is here. We would've and could've done it but instead, we should've stayed back in the black hole shaped vagina we all crawled out of where troll galaxy lies in the desperate legend we lived on there, and s anything is where that kind of idea took place which is worse than this world. God I just wish I could go back where anyone understands us.
Reply · Like · Mark as Spam

Great! - May 15, 2014 at 8:08am
So Tony, if design is no big deal, then why does Samsung keep trying to copy Apple's? And for the bits that they don't copy, why is it that Samsung BUILDS them so crap? To me, great design is the beginning to a great product. Without it, you are essentially building crap. Once other manufacturers get up to speed, Samsung will lose the precious Apple contracts. Already they are losing huge amounts of money from the reduced orders.
Reply · Like · Mark as Spam

vueapp - May 15, 2014 at 1:38am
i bet samcrap is working on the ads now for when apple releases the bigger screens. also for when ios8 offers split screen multitasking. apple now is willing to follow market trends. thank god. PS APPLE, i want waterproof also! don't be afraid to "copy" as some of these idiot samsung/apple fanboys keep spewing. so sick of it. everyone copy each other! customers win.
Reply · Like · Mark as Spam

Lolwut - May 15, 2014 at 1:42am
You picked a side and that's that, thereby samshit is the spew, but here's the thing about water resistance (obviously is thanks to the name they called it) that doesn't mean it's waterproof completely.
Reply · Like · Mark as Spam
11 More Comments
Recent