Vonage rose 36 percent in New York trading after the Internet-phone carrier submitted an application for Apple Inc.’s iPhone, according to Bloomberg.

Vonage proposed the application this week, Natalie Kerris, a spokeswoman for Apple, said today in an interview. It hasn’t been approved yet because of a technical issue, she said. The solution should be simple and relates to the labeling of an icon, said Charlie Sahner, a Vonage spokesman.

“It would be significant because the iPhone is just growing so much and the extra revenue might be a big deal to Vonage, iPhone so that’s why the stock really shot up,” said Giri Cherukuri, head trader at Oakbrook Investments LLC in Lisle, Illinois. 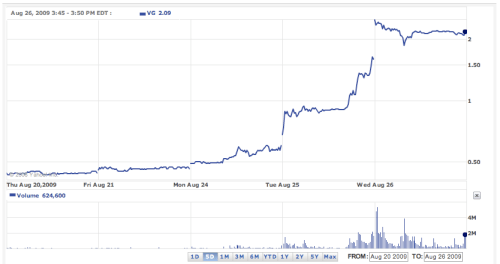