Apple has announced that adoption of iOS 9 has reached 61%. That's up from 57% two weeks ago.

If you haven't already updated to iOS 9 you can do so by going to Settings > General > Software Update on your device. 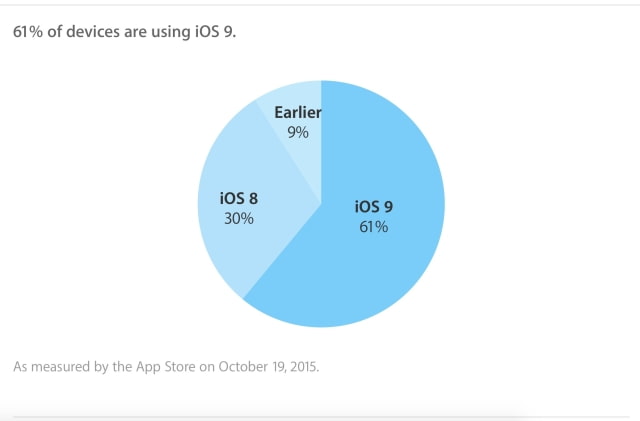 Atomic Adam - October 21, 2015 at 2:35pm
Yeah because the Jailbreak is out. Apple users aren't fools. The iPhone is a boring same phone without the Jailbreak and it's abilities. I'm sure the 6s and 6s Plus is selling twice as fast also now. I'll be buying a 128GB iPhone 6s Plus soon since now we're good with it working like we're used to.
Reply · Like · Mark as Spam

Ren - October 21, 2015 at 5:10pm
same my ass jaiobreak or not. iPhone even with iOS has had so many changes one year after another. The more years that pass, the more new stuff that keeps coming.
Reply · Like · Mark as Spam
Recent