A judge has completely dismissed a lawsuit that accused Apple of wiretapping Android users by intercepting and then failing to deliver texts sent from iPhones to Android phones.

The three plaintiffs in the case, Joy Backhaut, Adam Backhaut, and Kenneth Morris, switched from iPhones to Android phones in 2012. After the switch, texts sent from iPhones weren't being delivered to their Android phones. The problem was a major issue for iMessage which Apple wasn't able to fix until late 2014.

The three plaintiffs alleged that the undelivered texts constituted a violation of the Federal Wire Tap Act.

The case was made easier for Apple when it was discovered that two of the three plaintiffs had gotten rid of their old iPhones after they filed the suit. Thus, they were unable to demonstrate whether the texts sent to their number went to their Apple or Android devices.

Judge Lucy Koh decided for Apple with one sentence, "The Court has granted the Motion for Summary Judgement filed by Defendant Apple Inc." 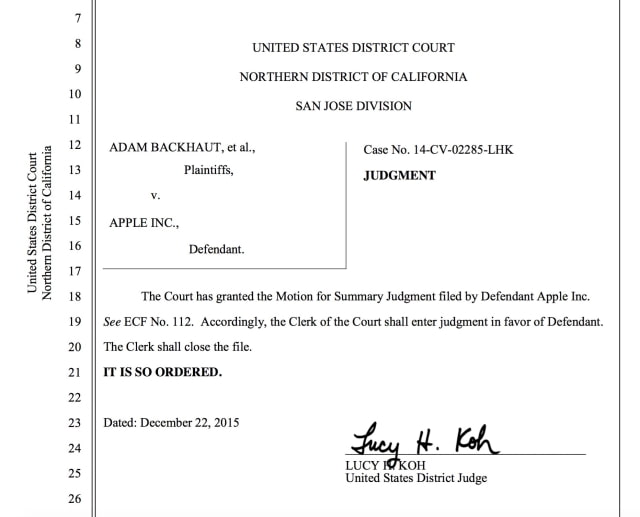 Question - December 23, 2015 at 6:35pm
Oh .... Another lawsuit for Siri asking me if I have legal papers . I asked Siri to name the colour on my high school mascot . Siri named it correctly, but spelt COLOUR as COLOR. I said to Siri that's not how it is spelt in my country . Siri replied " Do you have a greencard ?
Reply · Like · Mark as Spam

^O^ - December 23, 2015 at 11:53pm
what do you expect? Not everything can be perfect. That's like saying lawsuit against a clock company just because it's a few seconds off from a computer clock and it can't be exact with it. My point being it doesn't matter that much.
Reply · Like · Mark as Spam

Question - December 23, 2015 at 6:10pm
That was a baseless case. I think I could sue apple and win cause each time I ask "Siri" a question, the feedback I get from "Siri" is " Sorry, I didn't get that " if you wanna join me in the lawsuit, please feel free. Happy Holidays everyone.
Reply · Like · Mark as Spam