While Apple just announced a record 2015 holiday quarter, it also forecasted its first drop in sales since 2003.

The drop is blamed on smartphone saturation and the strong U.S. dollar versus foreign currencies. Bloomberg notes that $100 in fourth quarter 2014 sales is worth just $85 today because of fluctuating exchange rates.

Apple CFO Luca Maestri told the site that the company is feeling the effects of a "very different" economic environment around the world. Apple is starting to see "softness" in China, especially in Hong Kong, he said.

It's likely that Apple will be looking to the iPhone 7 to boost sales. In the meanwhile, the company is rumored to be unveiling a new 4-inch iPhone 5SE in March. 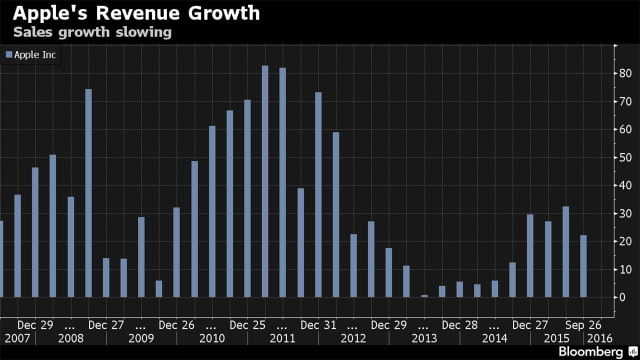 or... - January 27, 2016 at 1:20pm
It's because iPads sales are that slow compared to how many shown interest in iPhone, but not anymore? The sales year after year are still growing and maybe many out there are happy with the macs they have!
Reply · Like · Mark as Spam
Recent