Check out this mockup that visualizes what a MacBook Pro would look like with the rumored OLED touch panel along the top.

Following up that report, a leak out of an Apple manufacturing partner in China produced photos of what is allegedly the top case for the new notebook. The photos do appear to corroborate the existence of a touch panel above the keyboard.

Putting these reports together, Cameron, a 9to5Mac commenter put together the mockup below.

I made a mock-up of this design using images of the 12" MacBook on Apple's website and the dimensions from that spy photo.

Take a look at the image below and let us know what you think. Is this something you want to see on the upcoming MacBook Pro? 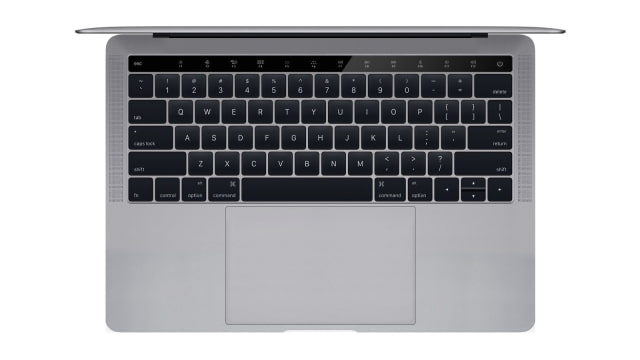 Syrnge - June 7, 2016 at 2:53pm
Troll comment, troll perspectives^ I remember the days when everyone was smart instead of assuming shit!
Reply · Like · Mark as Spam

jayco - June 7, 2016 at 4:09am
Nooo! Please apple keep the keys people that work with programa such as autocad or photoshop need the ESC key!!
Reply · Like · Mark as Spam

Great - June 7, 2016 at 3:37am
If they want to make the whole thing thinner, then the whole keyboard will be an OLED 3D Touch screen! Why muck around with just a strip?
Reply · Like · Mark as Spam

Great - June 7, 2016 at 3:39am
Eventually you'd have a keyboard area running full OLED full screen running IOS, and the regular display on the top running OSX. So the IOS bit doubles up as an iPad, and when connected to the top hall, acts as a keyboard.
Reply · Like · Mark as Spam
5 More Comments
Recent