The source code for a jailbreak of iOS 10.2 has been posted to GitHub by Luca Todesco but it's currently being described as incomplete.

incomplete iOS 10.2 jailbreak for 64 bit devices by qwertyoruiopz and marcograssi

Todesco announced that he was planning to add iOS 10.2 support to his yalu jailbreak of iOS 10.1.1 earlier this month. However, he has become frustrated with some in the jailbreak community and recently tweeted that after dropping the jailbreak for 10.2 he would stop all public iOS research.

PSA: I will stop all public iOS research after I drop that 10.2 thing. The idiocy of the jailbreak community is too much to handle for me.

Reddit user drake90001 has already used the source code to get Yalu 10.2 working; although the jailbreak is very unstable at the moment and mobile substrate does not work.

Just need the correct offsets and off you go. rootvnode is the harder one as it has never been posted, you must find yourself.

Todesco has yet to comment on whether he plans to release a compiled jailbreak or just the source code. We'll be monitoring the situation closely. Please follow iClarified on Twitter, Facebook, Google+, or RSS for updates. 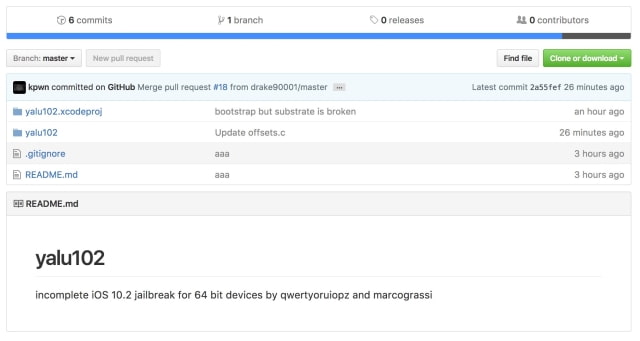 Xae - January 26, 2017 at 1:56pm
Y'all kill me with these jailbreaks I mean y'all complain that there isn't one lol it's the people like you that make the people that create them not even do it anymore like be grateful that there's people out there trying to to even make them still that type of stuff is hard to do
Reply · Like · Mark as Spam

D4xM4Nx - January 26, 2017 at 7:26am
Totally saw this coming the first time this Todesco character said he would release a jaibreak 'tool'... Showing how immature and stupid his strategies are, he doesn't deserve the trust reputable hacker groups like Pangu, TaiG, Evad3rs, Chronic Dev team, Dev team, etc always got from me. Being wary and cautious kept me on iOS 9.3.3 and with a perfectly working jailbreak. His rant amusing, trust denied. NEXT.
Reply · Like · Mark as Spam

Rocky45jumbo - January 26, 2017 at 4:59am
Stefan Essar is the man we need to give him a timeframe, will be back to normal Oo and Panga is Tadesco buddy so both are nothing but nut licky ...;)
Reply · Like · Mark as Spam
8 More Comments
Recent